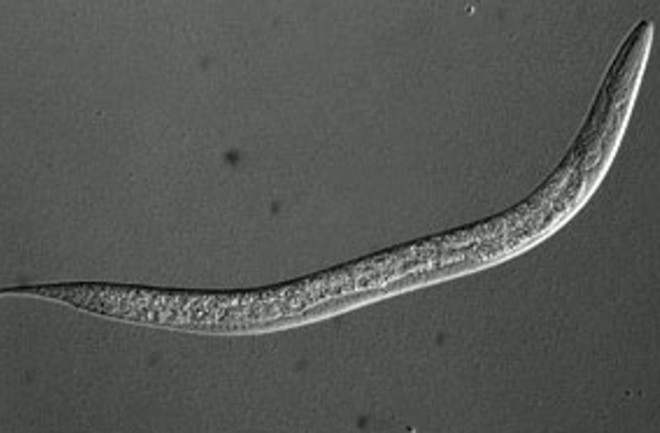 C. elegans you look great for your age. Credit: NSF It’s not as exciting as El Dorado’s source of eternal youth, but nitric oxide-producing bacteria are extending the lifespan of the humble roundworm Caenorhabditis elegans. The worm lacks the enzyme needed to produce nitric oxide. In animals which are capable of manufacturing nitric oxide, it has been shown to increase blood flow, promote efficient nerve signal transmission and regulate the immune system, all factors that may contribute to a longer lifespan. To see if nitric oxide alone could extend lifetime, researchers fed a group of C. elegans a soil-dwelling bacterium called Bacillus subtilis, which produces the gas. The worms, with colonies of B. subtilis established in their guts, had a lifespan of about two weeks---nearly 15 percent longer than a control group fed bacteria which didn't produce nitric oxide. The study, published in the February 14 issue of Cell, revealed that nitric oxide produced by gut bacterial colonies penetrated the worms’ tissues. Sequencing the worms' RNA showed that the presence of the gas turned up the activity of 65 genes, including several previously implicated in stress resistance and immune response. There may be a similar longevity effect from the bacteria in human guts. Research done in recent years has increasingly implicated various gut bacteria, or lack thereof, in health conditions from obesity to mood disorders. Longevity is very plausibly on that list, says study author Evgeny Nudler: "It may well be the case that our commensal bacteria control some of our genes, at least in the gut, to protect those cells against stress and age-related decline." Cue the bacterial fountain of youth.