Gun Control Could Gain Traction as a Public Health Issue 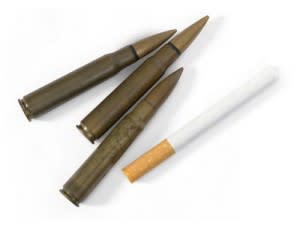 Today the White House starts gun control discussions with groups on both sides of the issue, and they've got their work cut out for them: the problem of gun violence is simultaneously social, cultural, educational, behavioral and governmental. Some researchers now argue that rebranding gun control as a public health issue may be the key to making real change. A study published in the Journal of the American Medical Association this week suggests that the issue of gun control could be better addressed by following the example of campaigns against cigarette use and car accidents, both of which have diminished significantly since they were forced into the realm of public health issues. Taxing firearms and ammunition like cigarettes, they suggest, would better represent the true cost of guns and create revenue to put toward preventing gun violence. It would likely cut gun ownership and use much like it cut the prevalence of smoking. And modeling after improvements to driver education and safety features in cars, which have drastically reduced traffic accidents, gun control, too, could benefit from better public education and laws requiring more safety features on guns. Perhaps the more challenging issue would be that of changing sociocultural norms surrounding guns. The researchers point out that, in the last few decades, cigarettes have evolved from a symbol of power and sexuality to one of weakness and addiction. By changing the messages of role models and the media, gun violence could likewise be shamed and therefore reduced. While the researchers highlight the instructive parallels between gun control and issues like smoking and car accidents, they also caution that the carryover is limited. Gun control brings with it a whole gamut of unique challenges that go beyond the lens through which the issue is viewed. Issue courtesy of titelio / shutterstock