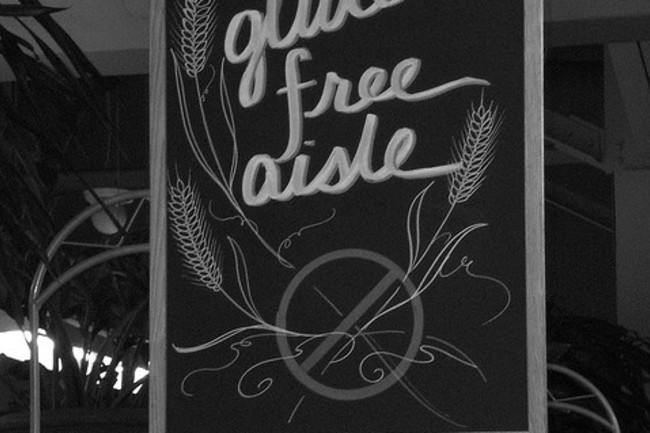 photo credits (whatsername?/flickr) It seems that people love to hate gluten. Though it plays an important role in baking, gluten has a bad reputation. The market for gluten-free foods and beverages reached $4.2 billion in 2012; an increase of 28% since 2008.^[1] It is actually difficult to go into Whole Foods and find a baking mix with gluten. But gluten isn’t necessarily bad; it’s just misunderstood. Have a heart, and let’s learn to better appreciate gluten for the remarkable protein network that it is. Gluten is comprised of two proteins; gliadin and glutenin, that are conjoined with starch in the endosperm of various grass-relatedgrains. Endosperms of flowering plants are stored with protein to nourish embryonic plants during germination.^[2]True gluten is typically defined as coming only from certain members of the grass family, namely wheat, but gluten may arise from other cereal grains, like barley and rye, as they also contain protein composites of similar proteins. When water and flour mix, glutenin molecules cross-link with gliadin, and form a sub-microscopic gluten network. Stirring and kneading help gluten stretch and organize into a stronger network, turning simple paste into dough. If dough is leavened with yeast, the fermenting microbes produce carbon dioxide bubbles that are trapped within the gluten network and cause the dough to rise. Baking dehydrates the dough as the protein foam structure solidifies. The development of gluten affects the texture of baked goods. Kneading promotes the formation of gluten strands and cross-links, creating baked products that are chewier the longer you knead the dough, such as pizza crust and bagels. Less developed gluten yields tender pastry products. For this reason, bread flours are high in gluten, while pastry flours have a lower gluten content. When a tender, flaky product is desired, like a pie crust, a fat such as shortening can be used to inhibit cross-link formation, along with less kneading and low moisture content.

photo credits (Andrea_Nguyen/flickr) Gluten intolerance has recently become a very talked-about condition. The most prominent form of intolerance occurs in people with Celiac disease. When people with this disease eat foods containing gluten, their immune system produces antibodies, which damage the intestinal lining, causing inflammation and nutrient malabsorption. The cause of the disease is currently unknown. Some gene mutations seem to increase risk of developing Celiac, but not everyone with the mutation is gluten intolerant. A study published in the American Journal of Gastroenterology states that the prevalence of Celiac disease in the US is 0.71%. ^[4] Recently, another potential form of intolerance called non-celiac gluten sensitivity has garnered attention. After consuming gluten, people with gluten sensitivity may experience diarrhea, fatigue and joint pain, but their intestines are not damaged as would be in the case of Celiac. In 2011, this condition was lent credibility by Peter Gibson, a professor of gastroenterology at Monash University and director of the GI Unit at The Alfred Hospital in Melbourne, Australia, who published a study that found gluten to cause gastrointestinal distress in patients without Celiac disease.^[5] The experiment was one of the strongest pieces of evidence to date that non-celiac gluten sensitivity is a genuine condition. However, his study had not revealed why his subjects reacted adversely to gluten. He resolved to rigorously repeat the trial, ensuring that no confounding factors affected the results. The study was conducted as follows: A total of 37 subjects, all meeting the criteria for having non-celiac gluten sensitivity were provided every meal for the entire study period. Any and all potential dietary triggers were removed, including lactose, certain preservatives, and fermentable, poorly absorbed short-chain carbohydrates, also known as FODMAPs. They were first fed a baseline diet low in FODMAPs for two weeks, then were given one of three diets (high gluten, low gluten, or placebo). Each subject cycled through each diet, and none ever knew what specific diet he or she was eating. Regardless of which diet they were on, subjects reported similar degrees of worsened gastrointestinal ailments. Their reported pain, bloating, nausea, and gas all increased over the baseline diet. The data clearly indicated that a nocebo effect was occurring – in other words, participants were experiencing an entirely psychological phenomenon in which a harmless substance causes a harmful effect.

"A celiac looking in the window of a Parisian boulangerie." photo credits (justmakeit/flickr) So whether you eat gluten, cannot eat gluten, or choose to avoid it, it is a scientifically interesting substance that has spurred quite a bit of talk and research. Perhaps gluten is damages us psychologically more than it does health-wise. Despite the possibly nocebic effects of gluten, the booming popularity of gluten-free products has allowed people with Celiac a much greater range of food options, and has encouraged people to examine the ingredients of their foods more closely, though they may be avoiding the wrong substance. Sources 1. "Gluten-Free Foods and Beverages in the U.S., 4th Edition." : Market Research Report. N.p., n.d. Web. 31 May 2014. 2. Castro, By Joseph. "What Is Gluten?" LiveScience. TechMedia Network, 17 Sept. 2013. Web. 28 May 2014. 3. "Celiac Disease." Web log post. Webmd.com. N.p., n.d. Web.Pomeroy, Ross. "Non-Celiac Gluten Sensitivity May Not Exist." RealClearScience. N.p., 4. Rubio-Tapia, A., JF Ludvigsson, TL Brantner, JL Murray, and JE Everheart. "The Prevalence of Celiac Disease in the United States." National Center for Biotechnology Information. U.S. National Library of Medicine, n.d. Web. 25 May 2014. 5. Biesiekierski JR, Peters SL, Newnham ED, Rosella O, Muir JG, Gibson PR. "No effects of gluten in patients with self-reported non-celiac gluten sensitivity after dietary reduction of fermentable, poorly absorbed, short-chain carbohydrates." Gastroenterology.