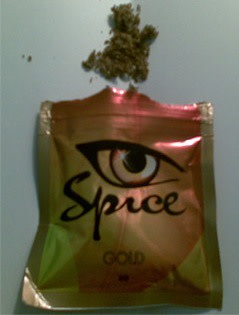 Synthetic, or designer, drugs are chemical compounds that imitate the effects of marijuana, stimulants, and other recreational drugs. Unlike illegal substances, synthetics are easily accessible to users who want to get high without risking legal repercussions. Although the Federal Analog Act of 1986

prevents the sale of chemicals with structures that are "substantially similar" to those of illegal drugs, it only applies to drugs intended for human consumption. Manufacturers easily leap this hurdle

by labeling their synthetic drugs as non-ingestible products such as incense, potpourri, or bath salts. Taking a different tack, the government recently passed the Synthetic Drug Abuse Prevention Act of 2012, which makes some of the popular designer drugs illegal. But did this really make synthetics less available? The act’s

long list of now-illegal chemical formulas may not be long enough: chemists can tweak the molecular structure of a compound to make it different enough to circumvent the ban, but similar enough to cause the same effects. Because manufacturers keep creating new formulas each time the old ones become illegal, synthetic drugs are incredibly difficult to regulate

. And this is dangerous because on top of getting users high, synthetics can have unintended effects. One type of synthetic stimulant called bath salts

entered the common vernacular after being linked to hallucinations, suicides, and violent attacks. And as 80beats reported in 2011

, synthetic marijuana may have given several teens heart attacks. And months after that post was published, its comment thread

continues to grow as people share their experiences with synthetic products. Anecdotes describe pounding hearts, intense panic attacks, loss of bodily control, and feeling certain that death was nigh. “I thought I was going to die, my heart was racing and it was pounding so hard it was affecting my breathing like when you pound on your chest when you talk. I have had panic attacks before and this was the mother of all panic attacks,” wrote one commenter

, “I felt weak, I felt an impending sense of doom, I thought I could be having a heart attack.” Others vomited heavily or lost control of their bladders. Even hours after taking the drugs, sensations of illness and anxiety remained.Easily evaded regulations mean synthetic drugs that cause these reactions will remain on store shelves, despite the government’s best efforts to pull them out of reach. [via Wired Science