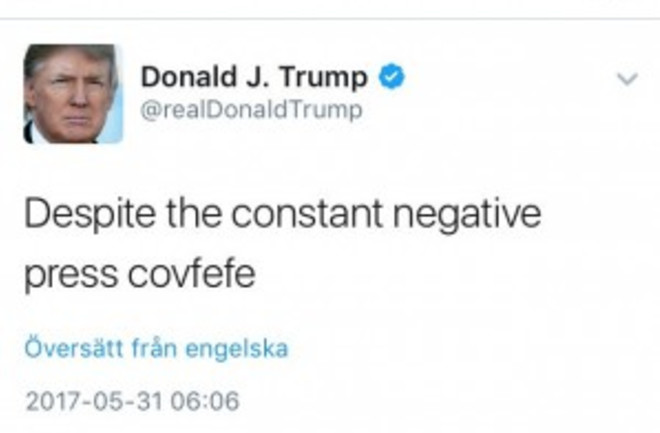 Image: Flickr/Per-Olof ForsbergThere's a lot more in Trump's Twitter feed than just a load of covfefe. In fact, the POTUS tweets often enough to be a source of information about his daily habits. This paper describes what Professor Till Roenneberg gleaned from a careful analysis of Trump's Twitter activities over several years. Because Trump shares his Twitter accounts with others on his team, Professor Roenneberg first had to separate Tweets originating from different devices. Tracking the times of day when the most consistently-used device tweeted revealed an interesting trend: the owner of the account Tweets most in the morning and evening. From this data, Professor Roenneberg estimates that Trump sleeps only 6.5 hours a day. No wonder he's so hard to get along with! Twitter as a means to study temporal behavior. "Biomedical research has exploited vital and other statistics (e.g., birth or death rates) for almost 200 years. The Internet has become a rich source of digital databases, which are being used for many lines of research (e.g., circadian and seasonal or metabolism). Internet-based studies generally investigate large populations while individual social media accounts are rarely used to analyse, for example, individual sleep–wake behaviour (e.g., youtu.be/wBNcP-LkpfA). I therefore applied time series analyses, commonly used in circadian and sleep research, to approximately 12,000 tweets sent from a single Twitter account (@realdonaldtrump; December, 2014 to March, 2017). The account was clearly used by different individuals/groups launching tweets from various devices. Among these, the Android phone was the most consistent over the years. Its tweet activity peaked twice a day (early morning and late night), and both peaks showed a strong seasonality by tracking dawn." From the full text: "Assuming that the account’s owner predominantly used the Android it can be used to characterise the user’s sleep–wake behaviour, (e.g., ‘chronotype’; for definition). We routinely assess chronotype with questionnaires or activity recordings. According to our actimetry database, an individual’s chronotype (represented by the mid-sleep point) correlates with the time of his/her average minimal activity. Although tweet activity only poorly predicts total activity, these results suggest that the tweet minimum around 1:30 AM (arrow in average profile) lies close to the Android user’s mid-sleep point (i.e., chronotype). 3.7% of US participants of the MCTQ have the same chronotype, 3.1% are earlier, and the most frequent chronotype is 3:30 (12.6%). In 2014, the major peak occurred predominantly in the evening but has since moved to the morning. Although this change echoes our finding that ageing is associated with advancing one’s chronotype (especially in men), the examination period may be too short to infer an age-related advance." Related content: A ball of dough can "learn." What's Donald Trump's excuse?Study concludes that conservative politicians are more physically attractive.Hey guys, if you want the ladies to dig your B.O., eat more veggies!