sounds like the title of a late 70s prog album, but it's actually the topic of a remarkable psychology paper just published.

Authors Gilles Clement and colleagues of the impressively-named International Space University were interested in the effects of zero gravity on optical illusions and the perception of shape. They hypothesized that our sense of gravity pointing down (via the inner ears) is responsible for certain visual illusions. In the Inverted T illusion, for example, two lines of equal length seem different, the vertical line appearing longer than the horizontal one. So they took 8 astronauts due to spend time on the International Space Station (ISS). Using a computer display setup, the astronauts were tested before, during, and after their time in orbit - the spaceflights lasting up to 180 days. The results showed that the magnitude of the inverted T illusion was decreased after a long spaceflight, although only a little bit. See above. Also, when asked to draw a square and an even-sized cross, the astronauts tended to draw the vertical lines shorter when in space, compared to back on earth: unlike with the inverted T illusion, this happened immediately, rather than only after prolonged time in zero G. 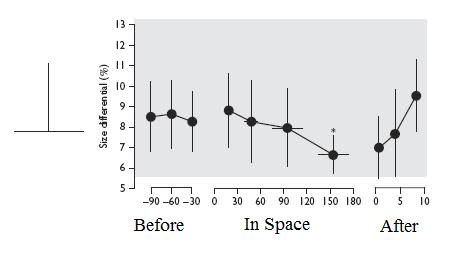 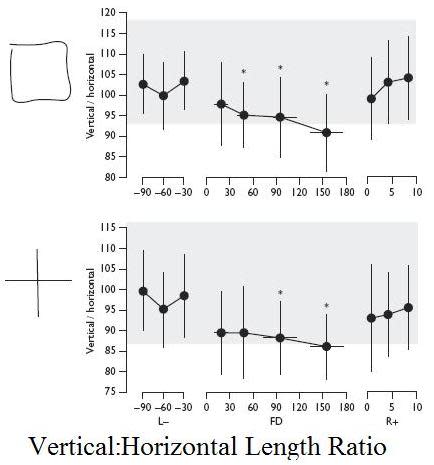 For two other illusions, the Muller-Lyer and the Ponzo, there was no effect, however. The authors write that these data support the idea that our sense of gravity affects our visual perception, and say that this is consistent with what happens in patients with inner-ear damage that affects the sense of up and down. The data are pretty noisy because of the small sample size, but for once, the authors have a pretty good excuse for why it was hard to recruit participants...