If you read an older work like The History and Geography of Human Genes based on classical genetic markers Sardinia stands out on charts of genetic distance. This is probably due to the fact that Sardinia is an island and gene flow from surrounding regions is relatively limited due to the physical barriers. So the first settlers have an outsized genetic impact which is not diluted over time by intermarriage with surrounding populations. Additionally, because an island can be treated as an isolate, that reduces effective population and increases the power of random genetic drift, which will likely result in a sharper deviation from the original genetic state at settlement. See the case of Iceland. With that in mind, there is a new paper out, High Differentiation among Eight Villages in a Secluded Area of Sardinia Revealed by Genome-Wide High Density SNPs Analysis:

To better design association studies for complex traits in isolated populations it's important to understand how history and isolation moulded the genetic features of different communities. Population isolates should not "a priori" be considered homogeneous, even if the communities are not distant and part of a small region. We studied a particular area of Sardinia called Ogliastra, characterized by the presence of several distinct villages that display different history, immigration events and population size. Cultural and geographic isolation characterized the history of these communities. We determined LD parameters in 8 villages and defined population structure through high density SNPs (about 360 K) on 360 unrelated people (45 selected samples from each village). These isolates showed differences in LD values and LD map length. Five of these villages show high LD values probably due to their reduced population size and extreme isolation. High genetic differentiation among villages was detected. Moreover population structure analysis revealed a high correlation between genetic and geographic distances. Our study indicates that history, geography and biodemography have influenced the genetic features of Ogliastra communities producing differences in LD and population structure. All these data demonstrate that we can consider each village an isolate with specific characteristics. We suggest that, in order to optimize the study design of complex traits, a thorough characterization of genetic features is useful to identify the presence of sub-populations and stratification within genetic isolates.

Basically a genetic map writ small. Here's some charts which illustrate the dynamics: 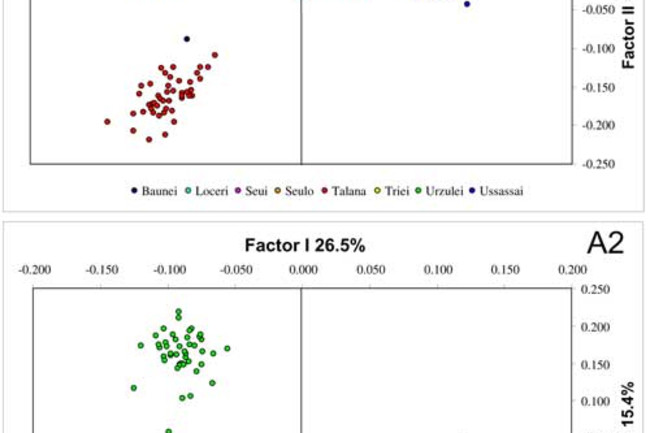 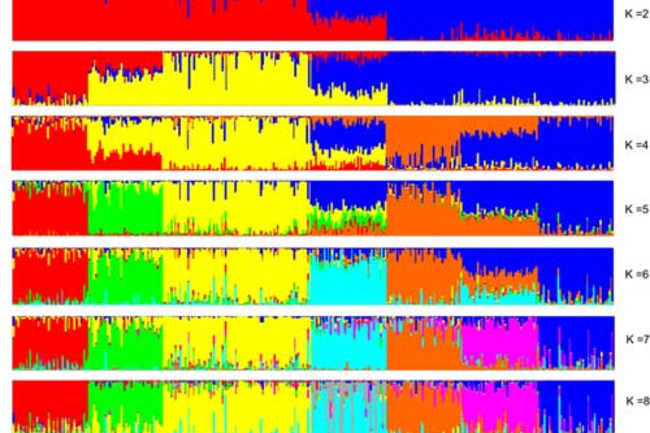 No surprise that people from relatively inbred villages are more closely related to each other than they are to others in other relatively inbred villages. My own hope is that these quantitative illustrations and measures of genetic distance and relationships can be used to paint a more precise picture of demographic change and dynamics over time. Consider for example the fact that "Puritan Stock" Americans are descended primarily from a wave of migrants on the order of 30,000 individuals in the 1630s. 30,000 is a large enough N that there might no bottleneck, but I'm wondering if at some point we might have sample sizes large enough where different streams of WASPs can be easily separated. The four folkways in Albion's Seed.