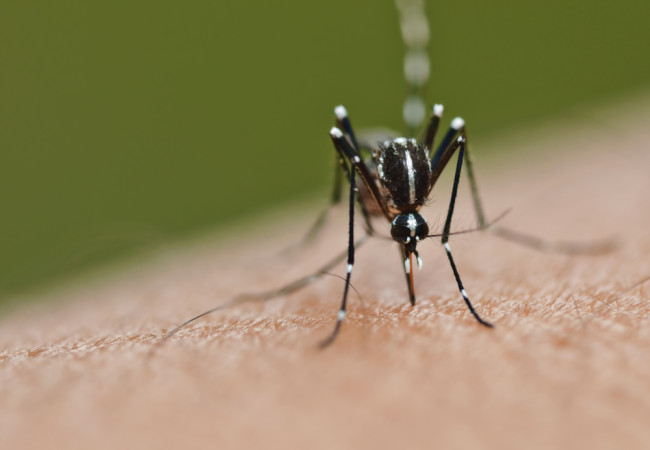 In the fight against disease-bearing mosquitoes, residents in the Brazilian city of Piracicaba have a new ally: mosquitoes. A biotech company has released into the wild an army of genetically modified male mosquitoes that will never see their children. That’s because these mosquito dads pass on a gene to their offspring that causes them to die before they ever mature. It’s a cutting-edge battle tactic that aims to reduce the population of mosquitoes that can infect people with dengue fever — and a new study finds that it’s working.

The initiative's primary target is Aedes aegypti, the main species of mosquito responsible for the 100 million dengue fever infections annually worldwide. Dengue fever causes severe joint pain, vomiting, and fever, and can be deadly. To push back against this growing threat, United Kingdom-based company Oxitec breeds male mosquitoes with a kind of "kill switch:" They produce a lethal protein if they aren't fed a special diet laced with an antibiotic. The initial crop survives in the lab, but when they are released into the wild, the males mate with the local females, and the resulting offspring inherit the fatal gene and die in their larval stage.

The Oxitec team has been testing their method in the Cayman Islands, Panama and Brazil, where 6 million killer mosquitoes have been released in the suburbs of Piracicaba. The method successfully reduced the mosquito population in a Brazilian suburb by 95 percent in one test trial — far more effective than pesticides, and low enough that the disease could not cause an epidemic. The Oxitec team published results from that trial last week in PLOS Neglected Tropical Diseases. Oxitec is hoping to do trials in the U.S. as well, but they are currently waiting for permission from the FDA. In recent years dengue fever has been on the rise in the Florida Keys. At this point, the FDA has completed its review, and will publish the results for the public to weigh in, New Scientist reports.

The downside to Oxitec’s method is that the deadly genetic effect wipes out its carriers, which means male mosquitoes need to be repeatedly introduced. On the positive side, it should allay fears that artificially engineered genes will persist in the wild. Oxitec isn't the only group attempting genetic modification as a way to solve mosquito-borne disease. As reported earlier this year in Discover, another team of scientists is attempting to wipe out female Anopheles mosquitoes, which transmit malaria. Another approach, the so-called CRISPR-Cas9 tool, could either be used to immunize mosquitoes against the malaria parasite or to eradicate the species as a whole. As for the ethics of these approaches, the topic deserves public scrutiny, scientists say.