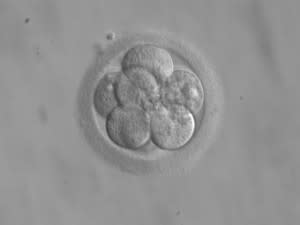 What's the News: Babies with three parents and fewer genetic diseases might soon be possible: A UK national health panel has found

. The techniques, which have been tested in mice, monkeys, and human cells, still need to be studied more before making the transfer to the clinic, though, and as with all genetic engineering techniques, there's a complex ethical maze ahead of researchers. What's the Context:

The Future Holds: For starters, the technique tested in macaques should be tested in human cells and the technique tested in human cells should be tested in monkeys, says the panel. If the techiques continue to prove safe, it's likely they'll begin to be considered for clinical use. It's difficult to say how that will proceed--the issue of destroying potentially viable fertilized eggs may be deemed unacceptable in some countries. There's the issue, too, that the mitochondria of the third "parent" will be passed on to the child, the child's children, children's children, and so on, meaning this genetic engineering is heritable. How will nations (and individuals) react to having a third person's genes permanently added to their own? Image credit: Wikimedia Commons, 8-cell embryo.