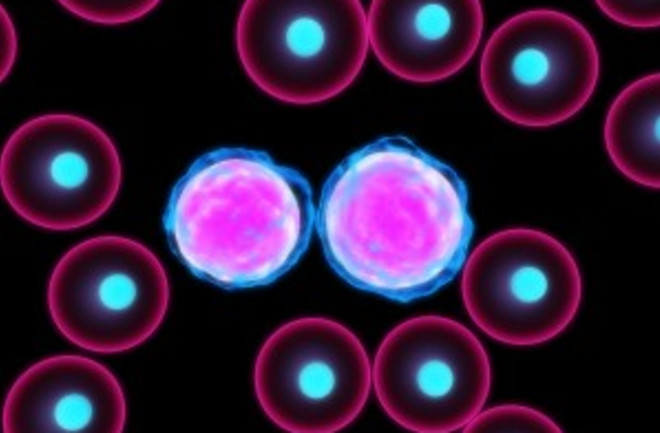 Leukemia cells. A cancer-treating technique being studied at the University of Pennsylvania has had dramatic results for some of the patients involved. Thanks to an experimental leukemia treatment the team first tried last year, 7-year-old Emma Whitehead is now in remission, the scientists have reported at a meeting of the American Society of Hematology this week. She is one of a dozen patients that have undergone the treatment; a third of those patients are now cancer-free. Whitehead was diagnosed with acute lymphoblastic leukemia in 2010 and had relapsed twice after chemotherapy treatments. For her, as has been the case with all the test subjects so far, this experimental treatment was a last resort. Leukemia, a cancer of the blood, often occurs in a particular form of white blood cells called B-cells. These cells are a key component in a healthy immune system; they make antibodies to find and fight infection. The B-cells of leukemia patients, however, grow out of control, failing to fend off infections and causing anemia, swollen lymph nodes, and tumors. The treatment relies on another type of white blood cells called T-cells. With the help of a disabled version of the HIV virus, these T-cells are genetically revamped to seek out and eliminate B-cells. The cancer-eliminating cells remain in the patient's blood even after the treatment, so it functions like a living drug. But it can be hard on the patients: As the cancerous cells were destroyed, Whitehead went through what researchers call cytokine-release syndrome, an intense series of fever and flu symptoms that almost killed her. And since the T-cells remove both healthy and malignant B-cells, a patient's immune system becomes weakened as a result of the treatment; Whitehead and other successfully treated patients must receive immunoreplacement therapy regularly. Still, the research team's track record has now won them financial backing from Novartis in order to build a research center and bring the treatment to market. Since the work is still in its early stages, and every patient will need a unique form of the treatment, commercialization is still a long way off. But the researchers and the drug companies are hoping this may be the first step toward finding a way to eventually eliminate leukemia and other forms of cancer.