Stem cells can serve as delivery vehicles for tumor-eradicating drugs. 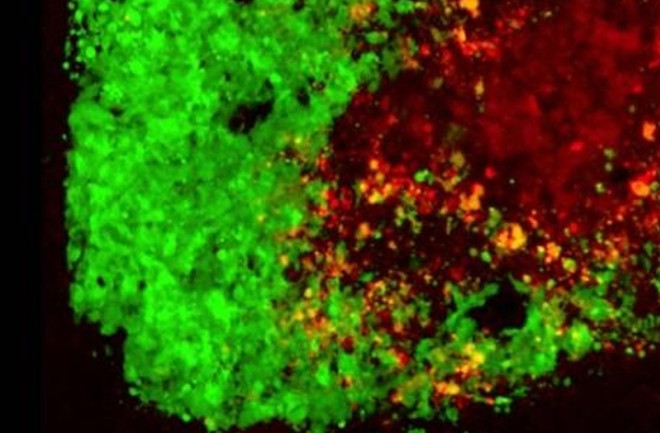 One of the first things Doug Heil noticed was the gibberish on the screen. It was March 2014, and Heil was at his computer, filling out work orders for the construction company he runs in the San Gabriel Valley of Southern California. All of a sudden, he could no longer string the letters together to form a single word. Heil hurried to the nearest hospital, where scans revealed he had glioblastoma, the fastest-growing type of brain cancer. Doctors gave him 15 months to live.

Surgeons at the City of Hope Medical Center cut a tumor the size of a tennis ball out of the left side of Heil’s brain. The symptoms quickly abated. Heil was back at work just two weeks later, and he even started riding his dirt bike again at the local motocross track. Yet within six months, despite continued radiation and chemotherapy, the cancer had grown again. Heil had two options: stick with a standard treatment with little chance of beating the tumor, or enroll in a new trial at City of Hope.

On Oct. 28, the 58-year-old Heil went back under the knife. Once again, surgeons removed as much of the tumor as possible, but this time they also injected tens of millions of neural stem cells and inserted a catheter deep into Heil’s brain. On regular biweekly intervals thereafter, he could receive another infusion of the cells, each genetically engineered for tumor destruction.

Heil was the first patient ever to receive multiple doses of this new cancer therapy — one that, like all experimental medicines, carries risks of unknown side effects and treatment failure. “The thought of being No. 1 on the list didn’t bother me,” says Heil. “I’m fearless.”

Stem cells are renowned for their regenerative capacity, able to grow into many different kinds of cells in the body. While still a controversial subject, many stem cells in clinical trials today don’t require the deliberate destruction of an embryo but can be obtained from adult tissues. These cells are being tested widely as a way to repair tissue lost in diseases as varied as spinal cord injury, heart failure and diabetes. But many types of stem cells also have a unique ability to seek out cancer cells, making them potential agents of cell death as well.

Tumors release proteins that naturally attract stem cells (the reasons why remain unknown), so these cells can serve as biological delivery vehicles to cancer tissue, releasing therapeutic payloads directly at the site of malignancy. “It’s sort of like having a heat-seeking missile,” says Maciej Lesniak, a neurosurgeon at the University of Chicago. “And the question is, ‘Which warhead do you put on top of it?’ ”

In Heil’s case, the warhead was a special type of enzyme that converts a nontoxic medication known as a prodrug, taken separately and orally, into an active cell-killing agent. This helps ensure selective drug targeting only at the site of the tumor. Other research teams are loading stem cells directly with cancer-killing viruses and proteins. If the strategy works, it could provide a powerful new weapon against almost any kind of tumor in the body.

“I’m cautiously optimistic,” says Jana Portnow, who’s running the clinical trial at City of Hope and serves as Heil’s doctor. “It has a lot of potential.”

In the City of Hope trial, participants like Heil receive 50 million to 150 million engineered stem cells every two weeks, followed each time by a seven-day course of the prodrug, called flucytosine. Prodrugs are pharmacologically inactive chemicals that the body can metabolize to produce a drug. In this case, our cells lack the enzyme necessary to activate flucytosine, but when it enters the brain and encounters the genetically modified stem cells, it becomes a cancer-destroying poison.

This approach carries some safety concerns. Because of the special ability of stem cells to self-renew and differentiate into other cell types, the cells could theoretically start replicating out of control and form tumors themselves. However, Portnow and her clinical team did not see any such problems in an earlier pilot trial in which they administered just a single dose of the engineered stem cells into the brains of 15 cancer patients.

That pilot study was designed only to confirm safety — and it did — but it also showed early signs that the therapy could work. “We have evidence that the stem cells did in fact convert the prodrug to an active chemotherapeutic agent in the brain,” says Karen Aboody, the translational researcher at City of Hope who developed the therapy.

In Heil’s trial — which enrolled its second and third participants this past spring — the City of Hope researchers are now directly testing whether more cells, given for longer, can actually halt tumor growth without causing any undue harm.

The treatment is promising enough that research teams around the world are developing similar stem cell therapies that can target and eradicate cancers of the prostate, lung, breast, skin and other tissues. In Germany, for example, the Munich-based biotech company apceth has already treated patients’ gastrointestinal cancer with stem cells harvested from their own bone marrow and modified to convert a prodrug called ganciclovir. Among the first six patients treated to date, four responded favorably to the therapy.

Meanwhile, at the MD Anderson Cancer Center in Texas, Michael Andreeff and his colleagues are gearing up to launch their own stem cell trial for women with metastatic ovarian cancer. The bone marrow stem cells in this case come from a stock supply and are engineered to produce a protein that inhibits tumor growth called interferon-beta. Andreeff could treat the first patients as early as this summer. Trials of breast or melanoma cancer (treated with these same stem cells) could be next.

“This is really a platform technology — it can be adapted to almost any of the solid tumors,” says Frank Marini, who worked with Andreeff before moving to the Wake Forest Institute for Regenerative Medicine in North Carolina.

Still, the need for stem cell-mediated delivery is arguably greatest in brain cancer because most standard drugs cannot easily penetrate the barrier that separates the blood (through which drugs typically enter the body) and the brain. With an estimated 190,000 people globally dying each year from tumors of the brain and nervous system, and no significant changes in patient survival in the past two decades, “we need to do something different,” says Khalid Shah, a cancer biologist at Massachusetts General Hospital.

In one of his strategies, Shah is loading stem cells with cancer-slaying, or oncolytic, viruses. “The beauty of the oncolytic virus is that when the cell gets killed, it releases more virus, and that infects more cells,” says Shah. “There’s a chain reaction.” The viruses replicate in the stem cells as they migrate to the site of the tumor. Viral agents then burst out of the stem cells, infecting the cancer tissue — but leaving healthy brain tissue alone. (In one common system, the virus is engineered with a gene deletion that prevents replication in healthy neurons.) The cycle of cell death then starts all over again. While Shah’s work is promising, it’s only been tested in mice so far.

Sadly for Heil, the prodrug-converting stem cells weren’t enough. In February, after eight infusions of the new cell therapy, scans showed that his tumor had returned.

Heil is as pragmatic as he is fearless. “I knew I was going to die anyway, so I was willing to help for the betterment of medicine,” he says. For him, “nothing has changed” because of the trial. But for medicine, the experience could help bring stem cell therapies one step closer to cancer patients everywhere.

“We learned a lot,” says Portnow. “He clearly didn’t have any bad immune responses to the stem cells, so that’s encouraging.” Maybe with other patients, the treatment will prove effective, too.

[This article originally appeared in print as "Tomorrow's Cancer Treatment?"]