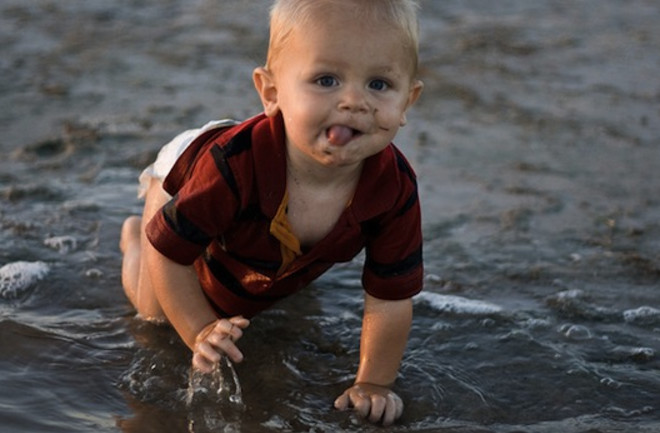 Katie Roiphe over at Slateis worried about helicopter parents screwing up their kids by trying to perfect them:

You know the child I am talking about: precious, wide-eyed, over-cared-for, fussy, in a beautiful sweater, or a carefully hipsterish T-shirt. Have we done him a favor by protecting him from everything, from dirt and dust and violence and sugar and boredom and egg whites and mean children who steal his plastic dinosaurs, from, in short, the everyday banging-up of the universe? The wooden toys that tastefully surround him, the all-sacrificing, well-meaning parents, with a library of books on how to make him turn out correctly— is all of it actually harming or denaturing him?

The article's title "If we try to engineer perfect children, will they grow up to be unbearable?" grabbed me (of course). The "engineering" bit wasn't, to my chagrin, referring to actual, genetic engineering. Instead, Roiphe was referring to parents obsessing over every aspect of their child's lives, as if some misstep in the minutia would produce an invalid. These parents seem to accept the nature/nurture divide and, realizing there is nothing they can do to improve the genetic make-up of their little bundle of joy, attempt to overwhelm nature with nurture. Yet in the process parents are inhibiting the, ahem, natural ways in which children learn and develop: unstructured play, exploration, discovery, and getting hurt. How can we get helicopter parents to back off? Maybe with genetic engineering? Roiphe is not the first to make an argument against over-parenting. Michael Sandel, in his "The Case Against Perfection" worries about helicopter parenting being exacerbated by genetic engineering :

But here, too, bioengineering and genetic enhancement threaten to dislodge it. To appreciate children as gifts is to accept them as they come, not as objects of our design or products of our will or instruments of our ambition. Parental love is not contingent on the talents and attributes a child happens to have. We choose our friends and spouses at least partly on the basis of qualities we find attractive. But we do not choose our children. Their qualities are unpredictable, and even the most conscientious parents cannot be held wholly responsible for the kind of children they have. That is why parenthood, more than other human relationships, teaches what the theologian William F. May calls an "openness to the unbidden."

But what Sandel worries about already exists, as Roiphe's piece shows. Even without genetic engineering, deranged hyper-parents that I see everyday in New York attempt to smother Mother Nature with viola lessons, Mozart immersion cribs, and organic baby food. Sandel's concern is that genetic engineering will some how make what is already cartoonishly awful somehow worse. I doubt that. Instead, I submit that genetic engineering will do the opposite. Parents who have designer babies will know their children will have been engineered with high intelligence, musical acumen, marvelous memory, and a robust immune system. If you knew all those things about your kid on a genetic level, would you fuss over every moment, or let your kid get a little dirty, content that she'll discover her many talents on her own? Could it be that genetic engineering might (might!) be part of what cures us of the hyper-parenting pandemic? Let's hope so. For the kids' sake. Image of soon-to-be-filthy-child by jimharmer via Flickr Creative Commons