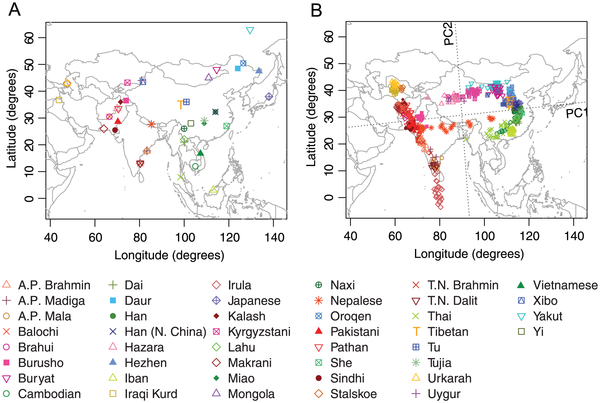 A paper is out in PLoS Genetics which attempts to formalize the relationship between genes and geography, A Quantitative Comparison of the Similarity between Genes and Geography in Worldwide Human Populations. They found a reasonable correlation, but there are two issues. First, African hunter-gatherers tend to reduce the correlation. This makes sense. If you think of African genetic variation to a great extent being shaped by the wave front of Bantu expansion, then isolation by distance works well enough. But the Pygmies, Hadza, etc., are isolated shoals which disrupt the smoothness of the sea of Bantu genetic variation. Second, they found a really good correlation in Asia. But one should be cautious about this:

However, although the concordance of a PCA plot with geography is perhaps best known for Europe — which does not have a barrier of comparable importance to the Himalayas — we obtained the unexpected result that in spite of the Himalaya barrier, the Procrustes similarity score was actually highest in Asia. When further examining the population structure on separate sides of the Himalayas, we found lower similarity scores between genes and geography in our East Asian and Central/South Asian samples. Especially for the East Asian sample, our results indicate weaker correlation between genes and geography in the east-west direction.