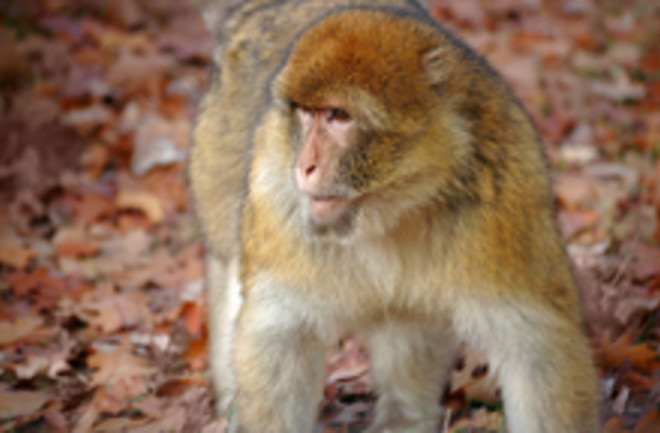 A gene therapy treatment intended to reverse muscle weakness appears to restore muscle mass in monkeys, raising hopes that doctors may soon be able to treat this condition in humans with degenerative diseases like multiple sclerosis and muscular dystrophy. Scientists injected a gene into the monkeys' thighs that

causes cells to produce human follistatin, which interferes with another compound called myostatin. Myostatin breaks down muscle, so in theory adding follistatin should encourage muscles to grow [Reuters].

And grow they did. Within three months the monkeys' thigh muscle mass increased, and the effect lasted for 15 months, according to the research published in the journal

Science Translational Medicine. (Not quite the same effect as the whippet turned hugely muscular by a natural genetic defect.) The relatively long-lasting effect is promising for researchers looking to treat lifelong conditions such as multiple sclerosis and muscular dystrophy. The researchers say the treatment was safe and that no other organs were affected. But there could be a downside to this promising work--some experts are asking whether this therapeutic technique could be used by unscrupulous athletes looking to tweak their genetics and to build stronger muscles. The drugs companies Amgen and Wyeth have already begun testing myostatin inhibitors in humans and

such studies have already prompted fears about the potential for myostatin inhibitors to be abused by athletes hoping to gain the competitive edge. If gene therapy can achieve similar outcomes in humans, such modifications will be even harder to detect [New Scientist].

has banned gene doping in athletic competitions for obvious reasons, even though there's no evidence that any athletes are tinkering with their genes.

Of course there wouldn't be: If some jock were gene doping, there would be no way to detect it.