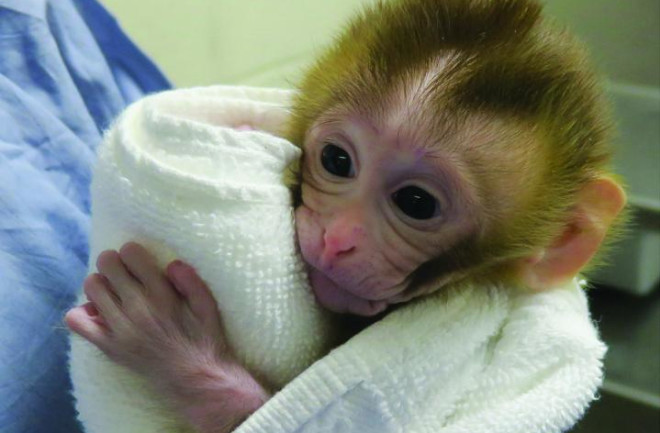 Baby Grady at 2 weeks old. (Credit: OHSU) Childhood cancers rob kids of their youth. The treatment often saves lives but steals their opportunity to have kids of their own. About 30 percent of childhood cancer survivors become permanently infertile thanks to chemotherapy and radiation treatment. Now researchers show they can restore fertility to sterile male monkeys that received chemotherapy as youngsters by cryopreserving immature testicular tissue. A young female monkey conceived from the preserved tissue is proof the approach works. The breakthrough is the final step before human trials, the researchers say. "This advance is an important step toward offering young cancer patients around the world a chance at having a family in the future,” Kyle Orwig, a reproductive biologist at the University of Pittsburgh School of Medicine, who led the new research, said in a statement. “Having succeeded in producing a live-born and healthy baby, we feel that this is a technology that is ready for the human clinic.”

When boys reach puberty, their testosterone ramps up. The hormone kicks stem cells into gear to produce sperm. But chemotherapy or radiation treatment for cancer can kill these stem cells. Boys don't make mature sperm before puberty, so cancer treatment can leave them infertile. Previous research from other groups showed that immature testicular tissue from mice, pigs and monkeys could develop under the skin of mice to produce mature sex cells capable of generating offspring. The work suggested to Orwig that it might be possible to save fertility in young cancer survivors. The researchers removed one testis from pre-adolescent rhesus macaque monkeys and cryopreserved the tissue. The young monkeys had been treated with chemotherapy, but the dose was not enough to make them infertile. About six months later, before the animals reached puberty, the team removed the monkeys’ other testis. Then they thawed and grafted the tissues back into the same animal. Over the next several months, the monkeys went through puberty and the grafts grew. When the researchers removed the grafts from the animals and dissected them, they found mature sperm.

The team used the sperm from the grafts to impregnate female rhesus macaques by intracytoplasmic sperm injection, a commonly-used in vitro fertilization technique. Out of six females, one became pregnant in December 2017. The researchers monitored the pregnancy by ultrasound. On April 16, 2018, a healthy female baby monkey was born by cesarean section, the researchers report today in the journal Science. The researchers named the baby monkey Grady, a portmanteau of “graft-derived” and “baby.” Today Grady is a social, playful and healthy 11-month old. The research shows mature sperm can develop from immature tissue that was once frozen, even in once-infertile animals treated with chemotherapy, Orwig told Discover. As tissues from kids with cancer may have to remain frozen for many years, “the freezing and thawing [of testicular tissue] was the most important aspect of this study,” he said. “This was really the last step on the road to translating to the human clinic,” Orwig said.