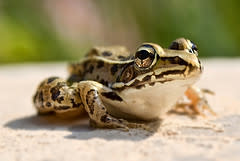 In 2003, DISCOVER published a profile of Tyrone Hayes, a professor of integrative biology at the University of California, Berkeley. Hayes went looking for the effects of the herbicide atrazine on frogs and found evidence that it feminized males and diminished larynxes. Apparently the professor, also know to spin rhymes at conferences, has sent years worth of emails to employees of atrazine's manufacturer, Syngenta. The company recently released them in a 102-page pdf. Some excerpts follow: March 16, 2006 (page 22)

dahh... and you guys think i'm unstable? hey, i will update you on how screwed you are tomorrow. love papa

if you thought this was ever just about atrazine, you were set to lose from the beginning. not to worry... we all make mistakes... even me... I used to call you "friend".

THE REIGN by tyrone you can turn on your headlights but you can't see through the HAYES you can mark your calendar, but you can't keep track of the DAZE bow down fools my name is tyrone

..is your phone off-da-rook? reporters blowing up my cell! can you believe that someone wants to publish my emails and rhymes? like some kind of book of poetry? by the way...about to sh*t on next week too...here's a preview... word to your mother. tyrone

"Don't be scared now, Finish what you started. Watched sh*t grow out of control, Now you want no part of it." (Earl [DMX] Simmons) Syngenta has filed an ethics complaint. Hayes toldScienceInsider that the emails were responses to verbal threats and abuse, and that he apologizes to any supporters he may have offended. But he's not exactly backing down.

"Where I come from, whether or not you're proud of it, you stand by what you've said."