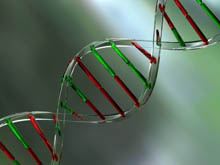 The bacterium called Neisseria gonorrhoeae is what gives humans the sexually transmitted infection gonorrhea. And it also takes something: human DNA. Northwestern University researchers report in the journal mBio that they've found pieces of human DNA in samples of the bacteria.

Gonorrhea is one of very few diseases exclusive to our species, and is one of the oldest recorded diseases in human history. An ancient disease that resembles gonorrhea’s symptoms is even described in the Bible, according to Hank Seifert, senior author of a paper on the gene transfer. [Popular Science]

Seifert and colleague Mark Anderson looked at 14 different samples of N. gonorrhoeae. Three of them possessed the chunk of human DNA. And they only saw it in the gonorrhea bacteria:

The pair looked for the same human DNA fragment in the genetically related bacterium Neisseria menigitidis, known to cause meningitis. "We screened many isolates and it wasn't present," says Seifert. That means the transfer to N. gonorrhoeae must have occurred since the two bacterial species diverged around 200,000 years ago. [New Scientist]

This is the first such transfer seen from humans to bacteria, though horizontal gene transfer is (somewhat frighteningly) common.

Scientists have observed similar genetic transfers across species, he said -- including relatively frequent transfers between different bacteria, between bacteria and viruses or between bacteria and other microbes such as yeast. One particularly significant exchange involves antibiotic resistance genes; when bacteria share these, it can make infections harder to treat with antibiotics. [Los Angeles Times]

But Seifert and Anderson don't know just how the human DNA chunk got into the gonorrhea bacteria—whether it was a one-time event or not—nor what it might be doing in there. The DNA sequence is missing a key part and not producing a protein, Seifert says, so it's possibly doing nothing in the virus, and only sticks around because it isn't harmful, either. Related Content: 80beats: The Enemy Within: Deadly Viruses Show Up in Genomes of Humans & Other Animals

80beats: My Excrement, Myself: The Unique Genetics of a Person’s Gut Viruses

80beats: Is Bill Gates’ Quest to Eradicate Polio Worth the Money?