Found: A Part of the Brain That Knows When the Brain Is Wrong 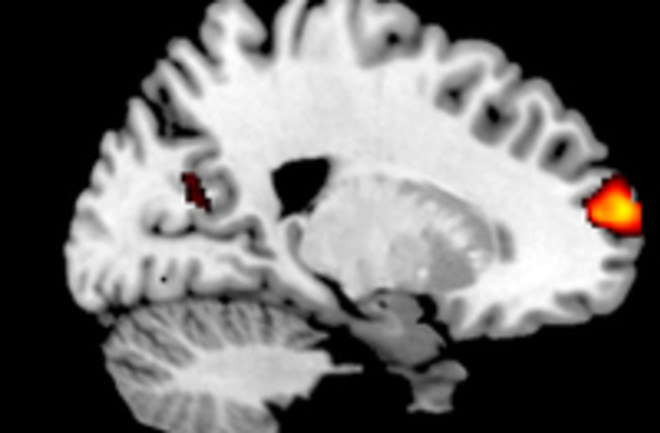 The size of a small part of the brain, right behind the eyes, is connected with a person's ability to gauge how likely they are to be right about factual questions, according to a study published in Science last week. This faculty is important in many real-world decisions; it can make the difference between relying on our mistaken judgment and asking for help if we realize we might be wrong. The study's lead author uses the game show Who Wants To Be a Millionaire? as an prime example of this kind of "metacognition," or thinking about our own thinking:

"You might have the opportunity to ask the audience or phone a friend," says Steve Fleming, a neuroscientist at University College London. But, he adds, "You need to know how sure you are about your own answer before you opt to use those lifelines." [NPR]

To study how this happens, Flemming asked study participants to identify a bright patch on a computer screen, then asked them how confident they were in their choice. The testing program adjusted to every participant's ability so that each person was getting about 71 percent of the answers correct. After the testing, Flemming's team scanned the brains of each of the participants, and compared their brain structure to their answers on the test and their levels of confidence in those answers.

"We found the volunteers differed quite markedly in their ability to introspect about their decision, so some volunteers were better at knowing how they had performed, and some were less good at knowing," said Rimona Weil, one of the authors, at a press conference. [msnbc.com]

The part of the brain that differed between these two sets of participants is called the anterior prefrontal cortex. The area had more gray matter in people who felt more confident in their decisions, and the researchers also found differences in the integrity of the white matter--the connection between this gray matter and the rest of the brain.

This discovery fits with previous work that showed people with damage to this brain region had trouble assessing their own decision-making, even though their performances on a task were unimpaired. "In terms of looking at variation across a population of healthy individuals, our study is the first to say how [introspection] might link to structure," said study researcher Stephen Fleming.... [msnbc.com]

Knowing how the brain carries out this meta-cognition develops and deteriorates could help doctors treat people suffering from schizophrenia or Alzheimer's.

"Take the example of two patients with mental illness, one who is aware of their illness, and one who is not. The first person is likely to take their medication, the second less likely," he said. "If we understand self-awareness at the neurological level, then perhaps we can adapt treatments and develop training strategies for these patients." [The Independent]

The study also hinted that this ability may be able to be improved through training, but more research needs to be done:

Fleming said that an unanswered question is whether people are born with these brain differences that allow them to be more introspective, or whether their specific thoughts and behaviors cause them to become better at it. "What we need to do is assess whether we can train people to be more introspective, and if so, does that lead to changes in these structures of the brain," he said. [Businessweek]

80beats: “Expert” But Bad Financial Advice Turns Off Decision-Making in the Brain

80beats: Hand Washing After a Decision Scrubs Away Those Lingering Doubts

Not Exactly Rocket Science: Rats check their own knowledge before taking a test

Why Dehydration Can Turn Deadly for Seniors