Foragers to farmers: a tale of collective action?

The economist Samuel Bowles recently had a paper out in PNAS which caught my attention, Cultivation of cereals by the first farmers was not more productive than foraging. This naturally begs the question: why did farming conquer foraging as a lifestyle? First, let's look at the abstract:

Did foragers become farmers because cultivation of crops was simply a better way to make a living? If so, what is arguably the greatest ever revolution in human livelihoods is readily explained. To answer the question, I estimate the caloric returns per hour of labor devoted to foraging wild species and cultivating the cereals exploited by the first farmers, using data on foragers and land-abundant hand-tool farmers in the ethnographic and historical record, as well as archaeological evidence. A convincing answer must account not only for the work of foraging and cultivation but also for storage, processing, and other indirect labor, and for the costs associated with the delayed nature of agricultural production and the greater exposure to risk of those whose livelihoods depended on a few cultivars rather than a larger number of wild species. Notwithstanding the considerable uncertainty to which these estimates inevitably are subject, the evidence is inconsistent with the hypothesis that the productivity of the first farmers exceeded that of early Holocene foragers. Social and demographic aspects of farming, rather than its productivity, may have been essential to its emergence and spread. Prominent among these aspects may have been the contribution of farming to population growth and to military prowess, both promoting the spread of farming as a livelihood. 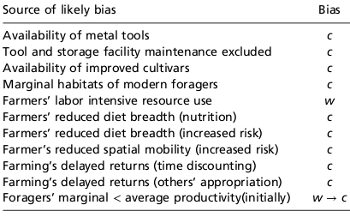 My own working assumption is that the "first farmers" existed in a state of land surplus, and so like the medieval peasants in the wake of the Black Death found themselves released from Malthusian constraints, at least until their natural increase swallowed up their affluence. Bowles gives several reasons to be skeptical of this conjecture. The list in table 2 shows the positive and negative biases in the model when one back-projects later stages of farming to the initial period. Metal tools, well developed distribution channels, and more productive varieties, were features of mature agricultural societies. On the time-insensitive scale the necessity of planning ahead and waiting patiently for the crop to be ripe count against the gains of the farming way of life as well. The main variable which would weight in favor of farming is the land surplus alone, though Bowels argues that the ethnographic data as to the benefits of a surfeit of this input factor of production is mixed. I am skeptical of this point, though I can't say I've dug deeply into the literature. There are other factors, such as the fact that farmers were immobile, and so subject to attack. A shift toward a few crops also reduced the diversity of the diet, and therefore entailed a trade off between a diet rich in micronutrients, fiber, protein, and fat, to one overloaded on carbohydrates. Finally, a reliance on a few crops also means heightened "tail risk." Think of the Irish potato blight. Hunter-gatherer populations would usually have a more diverse portfolio, and so be buffered more from environmental shocks. One thing to add though is that the productivity of farming vs. foraging differs on the margin. Farming as a complement to foraging can be highly productive, as one substitutes labor hours devoted to low gain foraging to high gain farming. The key is that as farming comes to be the dominant strategy the low hanging fruit is picked, and one has to squeeze the same, or less, production out of a greater number of hours. So why farming and not foraging? I find Bowels conclusion rather cryptic:

However, an evolutionary argument may be able explain the eventual spread of farming once it was adopted in a few places. Because of extraordinary spatial and temporal variations in weather, soil quality, scarcity of wild species, and other conditions that could make farming rather than foraging an efficient provisioning strategy, it is likely that a few groups would have found it advantageous (by the marginal conditions above) to take up farming as their primary livelihood. Then, in order for farming subsequently to be adopted by other groups—the evolutionary problem—farming need not have lessened the toil of subsistence. Even if health status and stature declined, the lesser mobility of farmers would have lowered the costs of child rearing (41). This lowering could have contributed to the dramatic increase in population associated with cultivation (7) and, hence, to the spread of farming (12). Or the fact that agricultural wealth (stored goods and livestock particularly) was more subject to looting may have induced farming groups to invest more heavily in arms and to exploit their greater population densities, allowing them to encroach on and eventually replace neighboring groups (11).

I think this suggests is that farming vs. foraging is a tale of quantity vs. quality. But well mobilized quantity can be quality. The disciplined phalanxes of ancient Greece and the legions of Rome were those of peasant farmers. They may have been relatively lacking in meat and milk, and therefore muscle, in comparison to aristocratic Gaulish and Persian levies, but they made up for it in cohesiveness of collective action and singularity of political purpose. The static immobility and density of farmers may have made them more susceptible to the institutions and ideology which bind a society together, and so allowed a group of villages to operate almost as an organismic whole. Against this mass action the forager clans, effective as individual units, but unable to coordinate, may have been impotent.

Therefore, the rise of farming may have been accompanied by the first demagogues and the blitzkrieg.