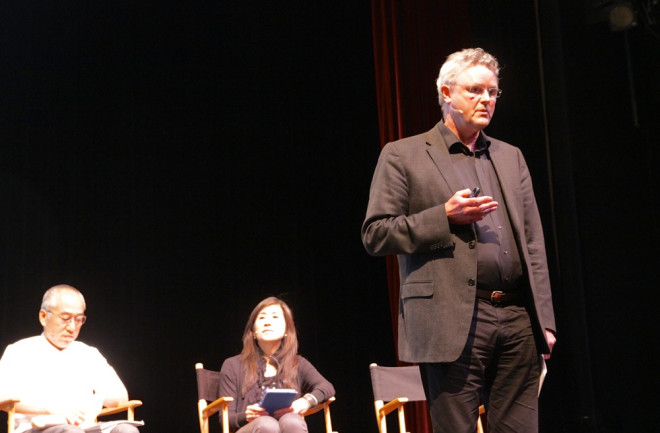 Onodera, translator, and Mouritsen at Science of Sushi. Photo Credit: Matthew Kang/Eater The audience present at The Science of Sushi asked our guest lecturers some great questions, and quite a few of them! Unfortunately, there wasn't enough time to answer them all, but Ole G. Mouritsen has been kind enough to answer some of the lingering questions that went unanswered. Below his responses, we have included some additional information to help quench your thirst for knowledge (and sake). Q: Are parasites within fish common? Are they a passable health problem? A: Parasites can be common in some species, e.g., cod, mackerel, herring, and wild salmon. If in doubt, always freeze or marinate fish before eating raw.

The FDA provides guidance under their Parasite Destruction Guarantee on the preparation of raw fish. Fish intended to be consumed raw must be “frozen and stored at a temperature of -20°C (-4°F) or below for a minimum of 168 hours (7 days)”. ^[1]

Photo Credit: Antony Theobald/Flickr Q: What exactly is 'sashimi/sushi grade' fish? A: Fish that can be eaten raw. If in doubt, ask a fishmonger you trust.

In the United States, the term ‘sushi grade’ is unregulated. However, many suppliers have set up their own parameters for their products, often reserving the term for their most fresh fish.^[2]

Photo Credit: Marla Showfer/Flickr Q: What are your thoughts on using brown rice in sushi? A: I don't myself like brown rice in sushi. If you worry about the calories in white rice, don't eat sushi. During the milling process, the germ and bran layer of brown rice are left intact, and are not removed as they are in white rice. The only layer removed is the outermost layer, the hull. Some health-conscious people often opt for brown rice because several vitamins and dietary minerals are lost in this removal process and the subsequent polishing.

Photo Credit: Thokrates/flickr Q: What's your thought on cooking rice with 'bamboo charcoal'? A: I don't understand this question. In principle the source of heating does not matter (except if the cooking pot is open and takes taste from the burning material). Q: Sake: does it add, hide, or subtract? A: It is a matter of taste. An old Japanese proverb says that one should not drink sake with rice (too much of a good thing). So drink sake before the sushi meal, or after.

Sake, the alcoholic rice beverage officially known as "Seishu" is defined as one of the following:

After any of these processes, the liquid is then strained through a mesh to produce a clear beverage. ^[3]