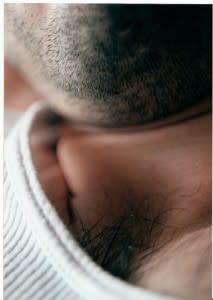 After the popularity of Wednesday's beard post, we couldn't resist sharing this oldie-but-goodie for Flashback Friday. Enjoy!

It’s widely accepted that most women don’t like men with lots of body hair. But does this preference have a biological basis, or is it a result of cultural conditioning? In this study, Finnish scientists showed women “pictures of male torsos before and after the removal of body hair” and asked them to rate the attractiveness of each photo. They also polled the women about their menstrual cycles and their partners’ and fathers’ body hair levels. Turns out that women generally preferred body hair levels that resembled those of their current partners and their fathers, and they tended to prefer less body hair when they were ovulating. This suggests that the preference has some biological basis, and that women might select mates with body hair levels resembling those of their father (at least in Finland). Preference for human male body hair changes across the menstrual cycle and menopause “It has commonly been considered that women’s preference with regard to male body hair changes over the years according to fashion and is influenced by the media. Experimental evidence, however, is currently lacking. We examined the effect of male torso hairiness on Finnish women’s attractiveness ratings by presenting pictures of male torsos before and after the removal of body hair.We found that the women’s preferences correlated strongly with the hairiness of their current partners, suggesting that body hair may play a role in actual mate choice. We also found that when the women’s fertility was at its highest, they preferred males with less body hair and that postmenopausal wosmen demonstrated stronger preferences relating to male body hair than did premenopausal women. Our study suggest that in the fertile period of their cycle, Finnish women prefer more the trait that is the current Western ideal of male beauty (hairlessness) than the trait that is traditionally (albeit in- correctly) seen as a symbol of high testosterone levels and masculinity. Thus, it seems that the phase of the menstrual cycle may affect the strength and direction of female preference even for traits that are not ‘‘good genes’’ indicators and whose preference may be culturally based. Interestingly, the hairiness of the women’s fathers correlated positively with that of their current mates. This suggests that women’s preferences as to paternal body hair and/or that this preference is heritable.” Bonus figure and excerpts from the main text: