Flashback Friday: Why don’t octopus arms get stuck together? 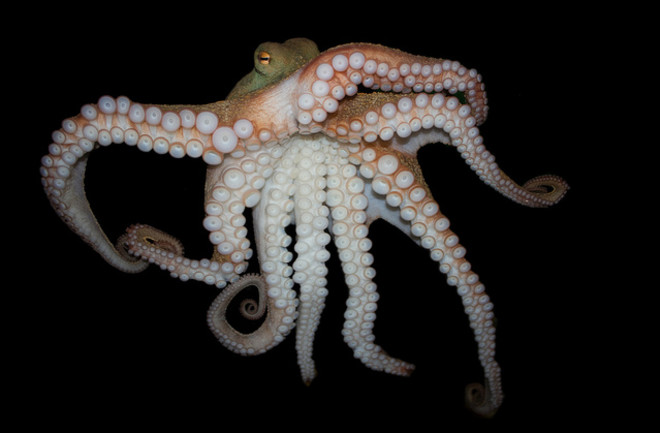 Photo: flickr/Brian GratwickeOctopus arms are truly amazing. They can move in all directions, and they are covered in suction cups that stick to virtually every surface they come into contact with. So how do these incredibly adhesive octopus arms avoid getting all tangled up together? The research presented in this paper suggests that octopus suckers do not spontaneously stick to octopus skin (unlike other surfaces) due to a chemical embedded within the skin itself. However, this natural barrier that prevents sticking can apparently be overcome, because living octopi can grab and eat severed octopus arms. In fact, octopi are able to sense their own ex-arms and are less likely to eat those than the arms of other octopi. Which is good, because eating your own arms is completely disgusting. Seriously. Self-Recognition Mechanism between Skin and Suckers Prevents Octopus Arms from Interfering with Each Other "Controlling movements of flexible arms is a challenging task for the octopus because of the virtually infinite number of degrees of freedom (DOFs). Octopuses simplify this control by using stereotypical motion patterns that reduce the DOFs, in the control space, to a workable few. These movements are triggered by the brain and are generated by motor programs embedded in the peripheral neuromuscular system of the arm. The hundreds of suckers along each arm have a tendency to stick to almost any object they contact. The existence of this reflex could pose significant problems with unplanned interactions between the arms if not appropriately managed. This problem is likely to be accentuated because it is accepted that octopuses are “not aware of their arms”. Here we report of a self-recognition mechanism that has a novel role in motor control, restraining the arms from interfering with each other. We show that the suckers of amputated arms never attach to octopus skin because a chemical in the skin inhibits the attachment reflex of the suckers. The peripheral mechanism appears to be overridden by central control because, in contrast to amputated arms, behaving octopuses sometime grab amputated arms. Surprisingly, octopuses seem to identify their own amputated arms, as they treat arms of other octopuses like food more often than their own. This self-recognition mechanism is a novel peripheral component in the embodied organization of the adaptive interactions between the octopus’s brain, body, and environment." Related content: What do giant squid look at with their basketball-sized eyes?Male squid with underdog mating strategy also make giant swarming sperm. NCBI ROFL: Stinging in the oral cavity caused by ingestion of the sperm bags of a squid: a case report.