Flashback Friday: Why did the panda's ancestors ditch meat for bamboo? 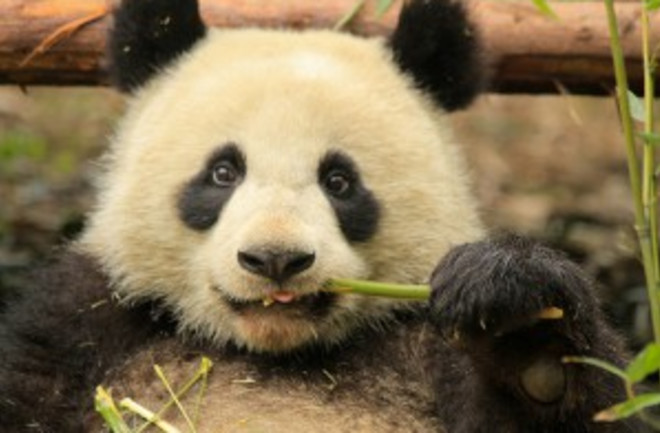 Photo: flickr/sujuhyteEveryone knows that pandas eat bamboo. But did you know that many of their closest relatives are carnivores? So how did the meat-eating ancestor of pandas become a vegetarian? According to this study, it may have had to do with the deactivation (technically known as "pseudogenization") of an umami taste receptor gene. Umami is the taste that makes things like meat, soy sauce, and mushrooms extra yummy. Apparently, at some point in panda evolution, the umami receptor became non-functional. Based on how much the gene has changed, the authors calculate that this happened around the same time that pandas started eating bamboo. Whether it's cause or effect is unclear, although the authors think the switch to bamboo may have happened before the gene was lost. Regardless, the loss of the gene reinforced the panda's vegetarian diet because it made meat less delicious to the bears. Now if only we could make chocolate less delicious... wait, that's a terrible idea!Pseudogenization of the umami taste receptor gene Tas1r1 in the giant panda coincided with its dietary switch to bamboo. "Although it belongs to the order Carnivora, the giant panda is a vegetarian with 99% of its diet being bamboo. The draft genome sequence of the giant panda shows that its umami taste receptor gene Tas1r1 is a pseudogene, prompting the proposal that the loss of the umami perception explains why the giant panda is herbivorous. To test this hypothesis, we sequenced all six exons of Tas1r1 in another individual of the giant panda and five other carnivores. We found that the open reading frame (ORF) of Tas1r1 is intact in all these carnivores except the giant panda. The rate ratio (ω) of nonsynonymous to synonymous substitutions in Tas1r1 is significantly higher for the giant panda lineage than for other carnivore lineages. Based on the ω change and the observed number of ORF-disrupting substitutions, we estimated that the functional constraint on the giant panda Tas1r1 was relaxed ∼ 4.2 Ma, with its 95% confidence interval between 1.3 and 10 Ma. Our estimate matches the approximate date of the giant panda's dietary switch inferred from fossil records. It is probable that the giant panda's decreased reliance on meat resulted in the dispensability of the umami taste, leading to Tas1r1 pseudogenization, which in turn reinforced its herbivorous life style because of the diminished attraction of returning to meat eating in the absence of Tas1r1. Nonetheless, additional factors are likely involved because herbivores such as cow and horse still retain an intact Tas1r1." Related content: Apparently, brown bears like oral sex, too!Are bears really attracted to menstruating women?NCBI ROFL: The wonders of koala poop revealed!