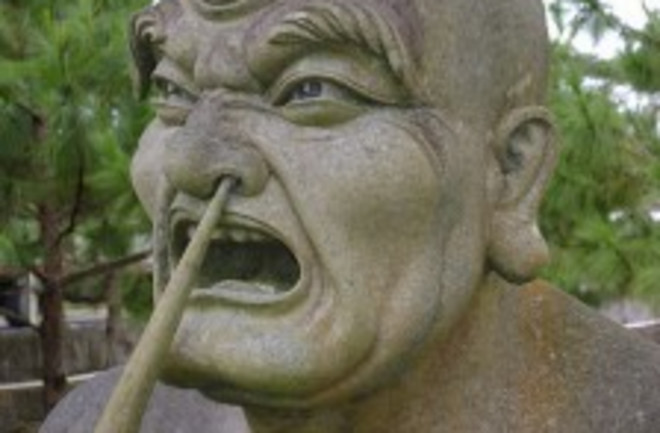 Would you rather have a leech in your nose or your ear? Well, thanks to the medical literature, we have plenty of gory details about each to help you choose! Previously we featured a story about ear leeches, and this study reviews several cases of nasal leech infestation. The most detailed description involves a Taiwanese man who had an occasional nosebleed for three months before the leech was discovered. We'll let the doctors finish painting the picture: "We performed nasal endoscopy... and found a gray-brown, twisting leech hidden laterally to the left inferior turbinate. Under local anesthesia, we successfully removed the nasal leech with forceps despite the leech trying to escape into the oropharynx during the procedure. The leech was about 12 cm in length. Tracing back his history, he had gone to a mountain area and washed his face with spring water 1 month before his first visit to our hospital." Still curious? We included a photo of the leech in question below. You're welcome!

Nasal leech infestation: report of seven leeches and literature review. "Nasal leech infestation rarely occurs in society today and it is usually reported as an anecdote. In this study, we present seven nasal leeches in six patients from 1984 to 2008. All patients initially presented with epistaxis. Four patients were less than 8 years old and two patients were older than 60 years old. All patients had spent time in rural streams 2 weeks to 2 months before the symptoms occurred. All of the seven leeches were removed smoothly and one leech migrated to the oropharynx during the operation. The length of the leeches ranged from 2 to 12 cm with an average length of 4.6 cm. Attention should be given to nasal leech infestation, especially in children and senior citizens who have visited rural streams and have been exposed to freshwater. One of our patients had two leeches lodged in his nasal cavities. Therefore, it is also important to re-examine both nasal cavities after the removal of one leech." Bonus figure from the main text:

A 12-cm (~5-in) leech removed from a man's nose. Related content: What’s worse than a leech in your ear? NOTHING!Flashback Friday: Does garlic protect against vampires? An experimental study.What doctors do when you get a live fish stuck in your throat. (Warning, it’s not pleasant.)