Flashback Friday: Finding the frequency and funkiness of Fido's farts. 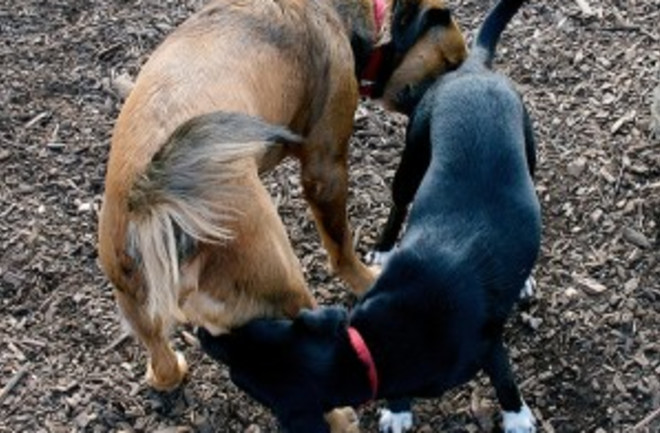 Photo: flickr/Tim DorrThink your job is bad? At least it doesn't involve judging the relative smelliness of dog farts. These researchers wanted to find a way to characterize dog farts "in vivo", so they did what anyone would do - held a tube next to the dog's butt to collect the farts, and then had "an odor judge [assign] an odor rating to each flatulence episode." The results? Dog farts vary a lot in frequency both within and between dogs, and they can be quite smelly. Dog fart odor judge, we salute you!Development of a technique for the in vivo assessment of flatulence in dogs. "OBJECTIVE: To develop a noninvasive method for the in vivo assessment of flatulence in dogs. ANIMALS: 8 adult dogs. PROCEDURE: Rectal gases were collected via a perforated tube held close to each dog's anus and attached to a monitoring pump fitted with a sensor that recorded hydrogen sulfide concentrations every 20 seconds. Patterns of flatulence were monitored for 14 hours after feeding on 4 days, and within- and between-dog variation was assessed over 4 hours on 4 consecutive days. Rate of hydrogen sulfide production (flatulence index) and frequency and number of emissions were evaluated as potential indicators of flatus characteristics. An odor judge assigned an odor rating to each flatulence episode, and the relationship between that rating and hydrogen sulfide concentration was determined. RESULTS: Flatulence patterns varied within and between dogs. Variation was most pronounced for flatulence index; mean coefficients of variance within dogs over time and between dogs on each day were 75 and 103%, respectively. Flatus with hydrogen sulfide concentrations > 1 parts per million could be detected by the odor judge, and severity of malodor was highly correlated with hydrogen sulfide concentration. Odor ratings were accurately predicted by use of the equation 1.51 X hydrogen sulfide concentration(0.28). CONCLUSIONS AND CLINICAL RELEVANCE: The technique described in this report appears to provide sensitive, reliable, and relevant data and will enable further studies of the factors that influence flatulence in dogs. Use of this technique also has the potential to aid in investigations of colonic physiology and pathology."