Flashback Friday: Do dogs really have a "guilty look"? 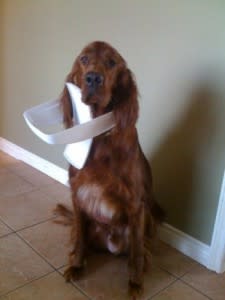 Does the dog in the photo look guilty to you? If you are a dog owner, you might be more likely to answer yes to this question. But is there any scientific basis to the idea that dogs can look guilty? To find out, these researchers videotaped 14 different dogs in different situations, including giving the dogs "the opportunity...to disobey an owner’s command not to eat a desirable treat while the owner was out of the room." Later, the owner either did or did not scold the dog for eating the treat. After careful analysis of the videotapes, the scientists found that the dogs only displayed the owner-identified "guilty look" when they were scolded, and especially when they had actually been obedient. Based on these results, the authors conclude that the so-called "guilty look" has more to do with being scolded rather than the dog actually knowing that he did something wrong. Disambiguating the “guilty look”: salient prompts to a familiar dog behaviour. “Anthropomorphisms are regularly used by owners in describing their dogs. Of interest is whether attributions of understanding and emotions to dogs are sound, or are unwarranted applications of human psychological terms to non-humans. One attribution commonly made to dogs is that the “guilty look” shows that dogs feel guilt at doing a disallowed action. In the current study, this anthropomorphism is empirically tested. The behaviours of 14 domestic dogs (Canis familiaris) were videotaped over a series of trials and analyzed for elements that correspond to an owner-identified “guilty look.” Trials varied the opportunity for dogs to disobey an owner’s command not to eat a desirable treat while the owner was out of the room, and varied the owners’ knowledge of what their dogs did in their absence. The results revealed no difference in behaviours associated with the guilty look. By contrast, more such behaviours were seen in trials when owners scolded their dogs. The effect of scolding was more pronounced when the dogs were obedient, not disobedient. These results indicate that a better description of the so-called guilty look is that it is a response to owner cues, rather than that it shows an appreciation of a misdeed.” Related content: Think you know what your dog likes to eat? Think again!Yes, dogs really can feel jealous.Dogs that look like puppies are more likely to be adopted.