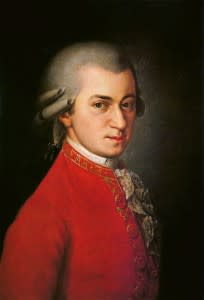 When you think of Mozart, you probably imagine an 18th century gentleman who was always thinking about music. Well, it turns out that when not composing musical masterpieces, Mozart liked to talk about "shooting off his rear-end gun". He was such a huge fan of potty humor that some historians, after reading a series of letters that Mozart wrote to his female cousin (the Bäsle letters), have proposed that he suffered from Tourette syndrome. Here, the author refutes that interpretation, instead arguing that Mozart's "frequent mention of erotic topics and, in particular, intensive use of scatological terms" were not uncommon for his time. Be sure to read the hilarious excerpt from the Bäsle letters below, and think of it the next time you hear "Eine kleine Nachtmusik."

Do features of Mozart’s letter-writing style indicate the presence of a neuropsychiatric disorder? Controversies about the Bäsle letters "In recent decades, several scientific publications have come to the conclusion that Wolfgang Amadeus Mozart might have had a Tourette syndrome. Other papers, however, have questioned this hypothetical diagnosis. The evidence for this diagnosis was mostly based on the so-called Bäsle letters, letters that Mozart wrote to his cousin when aged around 20 years. The letters have common stylistic characteristics such as frequent mention of erotic topics and, in particular, intensive use of scatological terms. However, these characteristics cannot be interpreted as clearly indicating a Tourette syndrome but may rather be related to psychosocial and cultural aspects of that time. There is little evidence for a Tourette syndrome from other sources, such as reports of behavioural abnormalities, and the evidence is not convincing." Bonus excerpt from the main text: "The Bäsle letters have a special position among Mozart’s letters, for one reason because almost all of them have scatological content or other peculiarities of language. Mozart researchers have therefore long been interested in them, and their interest continues [14, 21, 28, 29, 37, 42, 52, 55, 56]. An excerpt of the concluding section of the sixth letter is reprinted below to give readers not familiar with the Bäsle letters an impression of their stylistic peculiarities [49]: But all jokinggg aside – it’s precisely for this reason that I need you to come and stay – for you might have an important role to play; – so be sure to come, even for a bit, otherwise we’ll be in deep shit. I shall greet you high and nobly with pizazz and put my personal seal on your ass, I will kiss your hands and have such fun shooting off my rear-end gun, I shall Embrace you with a smack and wash you down front and back, I shall pay up all I owed you from the start and then let go a resounding fart, and perhaps even drop something hard – well, adieu, my Angel, my heart, I’m waiting for you with a smart, please send me right at this moment a little note of about 24 pages to Munich, Poste restante, but don’t tell me where in Munich you will be, so I won’t find you and you can’t find me; – votre sincere Cousin, W.A. P.S. Shit-dibatare, shit-dibitate, the pastor of Rodempl, he licked the ass of his kitchen maid, to set a good example; Vivat – vivat –" Related content: Flashback Friday: Did Gollum have schizophrenia or multiple personality disorder?Flashback Friday: Sexually aroused by farts? You’re not alone.Flashback Friday: High Altitude Flatus Expulsion (HAFE).