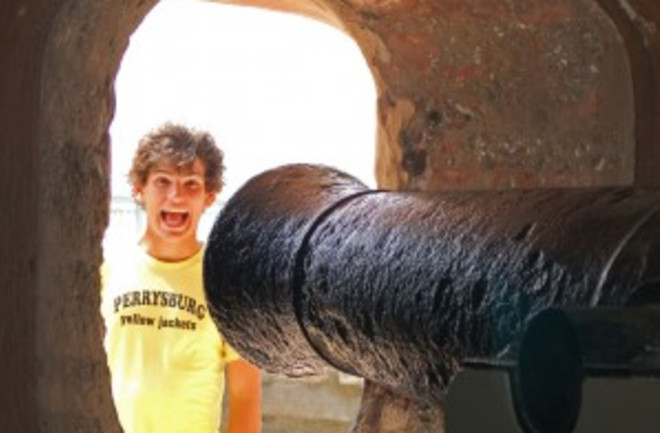 Photo: flickr/Kelley MariToday's post ranks pretty high up there on the list of studies in which you probably would not want to be a subject. Basically, the "unwitting participants" were videotaped while being pummeled with balls by either the experimenters or a hidden ball cannon. The goal of this somewhat sadistic study was to determine how long it would take for people to respond to the incoming projectile. Turns out that the subjects were better at actually catching the ball when it was thrown rather than fired, but even that response was unconsciously initiated - that is, the subjects responded without really knowing what was happening. We just hope they were well compensated at the end of the study.Catching of balls unexpectedly thrown or fired by cannon. “Although learned actions can be automatically elicited in response to expected stimuli for which they have been prepared, little is known about whether learned actions can be automatically initiated by unexpected stimuli. Responses of unwitting participants to balls unexpectedly thrown by an experimenter (n=10) or propelled by a hidden ball cannon (n=22) were recorded by motion capture. Experience of ball catching correlated negatively with hand movement distance, indicating most responses were defensive, but successful catches were made in response to both thrown and fired balls. Although reaction time was faster in response to fired balls, interception was more frequent in response to thrown balls, indicating that movement cues by the thrower facilitated unexpected ball catching. The latency to begin a catching action by the only successful catcher of an unexpectedly fired ball was 296 msec. Given current knowledge of reaction time tasks and latencies of neural substrates of conscious perception and deliberation, it is probable that there was insufficient time available for conscious preparation of catch attempts. Ball catching may represent an example of a learned response which can be rapidly and unconsciously initiated without contextual priming or expectation of the stimulus.” Related content: NCBI ROFL: How baseball outfielders determine where to run to catch fly balls.NCBI ROFL: How dogs navigate to catch frisbees.NCBI ROFL: Impact of Yankee Stadium Bat Day on blunt trauma in northern New York City.