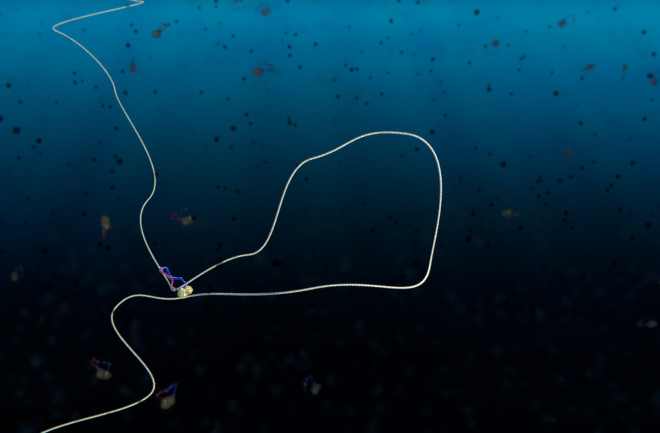 For all its precise helical structure, the DNA inside our cells is a mess. When a cell isn't preparing for the process of splitting itself in two, our DNA lies in a massive tangle inside the cell nucleus; a strand more than six feet in length jumbled like an earbud cord.

But when it comes time to undergo cellular division, this disorderly strand must be packaged neatly into chromosomes to be passed onto daughter cells — stuffed into a space much tighter than before.

To accomplish the task, a protein complex known as condensin grabs onto a strand of DNA and passes it through a ring-like structure to coil it into orderly loops perfect for packaging — a process that researchers have caught on camera for the first time. A team of researchers from Germany and the Netherlands was able to stain the proteins responsible so they could be viewed in action under a microscope and fix the DNA in place in order to watch the process happen in real time.

The feat settles a debate about how condensin works and could provide insights into hereditable diseases and some forms of cancer.

That condensin is responsible for looping DNA has been suggested for years now — the idea, in fact, seems to have come to one researcher as he handled ropes and climbing equipment during a mountaineering expedition — but researchers weren't quite sure if that theory or another was accurate. Either condensin looped DNA, or it relied on hook-like structures to tie it together.

The video, part of research published Thursday in Science, makes clear that the former mechanism is the right one. After staining the condensin with a fluorescent protein and pinning down a strand of DNA in the lab, the researchers introduced a slight current that would stretch any resulting loops out clearly. After that, all they had to do was bring it into focus with a microscope.

The resulting footage shows condensin drawing in a strand of DNA and spooling it out in a clear loop.

And the protein complex is good at its job, too. Opponents of the looping theory had suggested that such a mechanism would suck up too much energy, in the form of ATP, for it to work. The researchers newest work indicates that condensin is actually quite efficient, likely because it reels DNA in many base pairs at a time, as opposed to one by one. It's fast, too, operating at a relatively high rate of around 1,500 base pairs per second.

Intriguingly, they also observed that condensin only pulls on one of the two sides of the loop it is gathered, something they still can't explain. The findings aren't only visual evidence of a crucial cellular process, they could also help elucidate the causes of certain genetic diseases related to the protein family condensin belongs to, called SMC.

Arranging chromosomes during cell division, something that condensin also helps with, can lead to cancer if done incorrectly. The new insights into how it operates could provide further avenues for research in that direction as well.