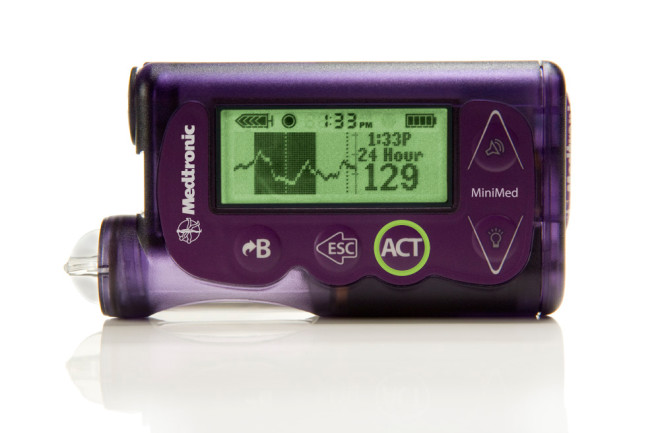 The artificial pancreas gadget is even available in purple. Image credit: Medtronic Good news for diabetics: Last week the FDA approved an artificial pancreas device that could automate the arduous process of blood sugar regulation. In a person with type 1 diabetes, the pancreas doesn't produce insulin---the hormone responsible for converting sugar into energy. As a result, a person has to carefully monitor her blood sugar levels and regularly inject insulin to keep it under control. Existing pumps can deliver insulin more discreetly than with a syringe, but each dose still has to be programmed manually by the wearer. During the day, it's a hassle. At night, it's a huge risk. A person can't monitor her blood sugar while sleeping, so levels can drop dangerously low. Researchers around the world have thus been striving to perfect an artificial pancreas to automate insulin regulation.

MiniMed to the Rescue

Researchers at the medical technology company Medtronic came up with an external pump called the MiniMed. It looks like a pager, but without the awkward '90s obsolescence. The gadget is wirelessly connected to a glucose monitor on the stomach that continually keeps track of a person's blood sugar levels through a small needle. Based on this data, the MiniMed's automated insulin delivery system injects the appropriate doses to keep glucose levels stable. That makes it the first real robotic replacement for a pancreas, in that it both detects and regulates blood sugar levels autonomously.

Sleeping on the Job

The Minimed even has an emergency response function to detect hypoglycemia, which Medtronic says catches low blood sugar episodes with 93 percent accuracy. As described in the Minneapolis Star Tribune,

If a person’s glucose levels reach a worrisome threshold, an alarm will sound with the Medtronic system. If the alarm fails to rouse the slumbering patient, the system will suspend insulin delivery for two hours.

This could one day allow many of the 25 million Americans with diabetes to sleep more soundly. Patients have to be 16 or older to use the MiniMed, but future iterations aim to bring that requirement down to just 2 years of age.

The artificial pancreas's approval is contingent upon improvements to its pump, which the FDA warned was inaccurately dosing insulin during early tests. But Medtronic says they're ironing out the issue and, along with the news of the gadget's conditional approval, announced they will have the improved devices available in the next few weeks. Just in time for the sugarfest that is Halloween. via Popular Science