Field Notes: Can We Beat Bacteria by Hacking Their Conversations?

Bacterial armies emit molecular war cries to stir others of their kind to action. Learning how these microbes gird for battle could help us find better ways to fight back. 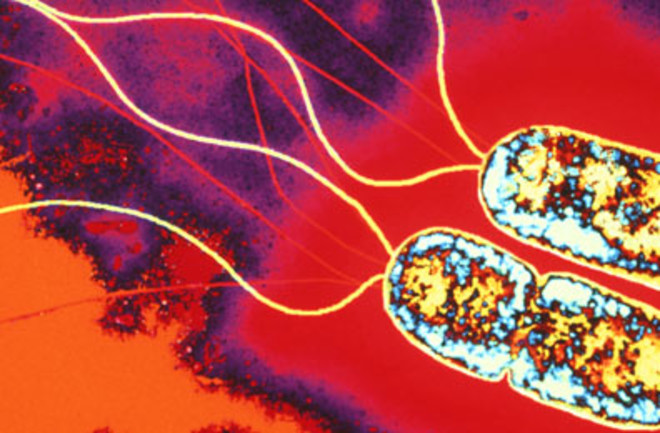 Madison, Wisconsin—Here in her lab on the University of Wisconsin campus, chemist Helen Blackwell and her colleagues are eavesdropping on the chatter among single-celled organisms. For a long time they just listened. Now they actively interrupt the rumble of bacterial communication for a variety of practical purposes—such as augmenting the good works of friendly bacteria and thwarting the designs of dangerous ones.

“These bacteria represent some of the simplest life-forms,” Black­well says, “and yet they are constantly signaling one another with chemicals, much the way animals and insects shoot out pheromones.” This signal communication, called quorum sensing, helps the bacteria determine when they exist in sufficient numbers to take action. For example, the common pathogen Pseudomonas aeruginosa, a stalwart of the Blackwell lab and a frequent culprit in the most virulent hospital-acquired infections, must reach a certain population density inside its host before it mounts an attack.

The bacteria conduct an on-going census by repeatedly synthesizing and emitting a signal compound that sends the message “I’m here.” When enough of the organisms gather together in a confined space, the compound becomes so concentrated that it permeates back through the cell membranes to combine with receptors inside the bacteria. This event triggers cellular machinery to produce proteins that initiate the bacteria’s characteristic group behavior, and the hapless patient who contracted Pseudomonas suddenly becomes fatally ill. “If you infect immunocompromised mice with Pseudomonas,” Blackwell reports, “they are dead in about 48 hours.”

Antibiotics may prolong life, but the drugs often fail to cure the infection because the bacteria quickly develop drug resistance. So Blackwell has focused on a different way to intervene: Isolate the signal compound, copy it synthetically in the lab, and then tamper with it to change its message. If the organisms were prevented from gauging their own numbers, Blackwell reasoned, they might back down.

“Pseudomonas have dozens of receptors, each with a different signal molecule,” she says, “and there is potential cross talk among them, so it’s a very complicated system.” Nevertheless, Blackwell’s group has managed to produce a “cocktail synthetic agent” that interferes with the complex quorum-sensing behavior. In early experiments, the synthetic compound slowed the rate of Pseudomonas infection in mice. A combination of the compound and an antibiotic produced “a synergistic effect,” she says, that worked better than either approach alone.

“When you knock out the quorum-sensing system, the organism doesn’t die. You’re not killing the bacteria, you’re just keeping them from behaving as a group,” Blackwell says. That is actually a good thing, she explains: “Since they don’t have to behave as a group to survive, you’re not going to see them develop resistance to the compound.”

On a yellow pad, Blackwell draws a portrait for me of a prototypical quorum-sensing signal molecule: a ring of carbon atoms attached to some hydrogen, nitrogen, and oxygen atoms, trailing off in a long tail composed of more carbon atoms. “We copy these in the lab,” she says. “Then we tinker with them, playing with the ring, putting in different sorts of constituents—different types of bonds, different types of tails—that nature can’t put in there.” Some of the 200 variants she has made have turned out to be duds, but others have coaxed strains of bacteria to behave in ways nature never intended, such as silencing themselves or becoming more acutely attuned to quorum-sensing signals.

Margie Mattmann, Blackwell’s senior graduate student dedicated to studying quorum sensing in Pseudomonas, takes me, step by step, through the ultrasmall-scale operation she uses to produce synthetic quorum-sensing molecules. “We have building blocks that we stick together in a very straightforward way,” she tells me. “It’s kind of like Legos.” First she pours a resin resembling fine sand into a glass vial. Then she takes off-the-shelf reagents from supplies stored in the lab’s fridge (“Instead of weighing out grams, we weigh milligrams, sometimes less,” she notes) and dissolves them with a solvent. This mixture is added to the resin in the vial, and a chemical reaction is stimulated with a microwave. The resulting compounds stick to the resin—“hopefully,” Mattmann confesses. The solvent gets evaporated, and the remaining material is put into solution and through a filtration process that “washes off all the garbage,” yielding a tiny residue (about 20 milligrams) of the desired compound.

“You know you’re an organic chemist,” Mattmann says, “when all you ever see is white powders.” All the tiny tubes of synthetic molecules in the lab indeed seem to contain salt or chalk dust or the like. “Some things are a little powdery-er, and you make a note of that. Other things are a little more oily or a little finer.” In the end she analyzes the powdered, synthetic, quorum-sensing molecules using nuclear magnetic resonance imaging or mass spectrometry “to see if we have the molecule we’re actually looking for.” Each “Lego” recipe is expected to yield an end product with a specific molecular weight; the final analysis reveals whether the compound actually matches that weight.

Although designing and building test molecules entails “a lot of chemical creativity,” Mattmann says that the most interesting work comes “when we start doing the chemical biology”—introducing the synthetic molecules into the living systems. But first the bacteria must be induced to grow and incubate until they reach the right concentration for such experiments. “You become a slave to the bacteria,” she says. “You work when they tell you that you can.”

An anonymous member of the research team expressed impatience with the lab bacteria by leaving graffiti on a blackboard: “Hey cells, GROW UP!”

Even the slowest bacteria seem speedy compared with the next phase of Blackwell’s research, which entails growing entire green plants from seeds. “I love plants, love to garden—absolutely love it,” Blackwell says. “The only thing an organic chemist usually gets to do with a plant is grind it up, find some sort of interesting molecule in there, and then try to make it. There would be no connection to how the plant actually uses that molecule in a natural context.” But now, after seven years of fundamental research on quorum sensing in bacteria, she and her group are starting to study the way living plants respond to signals given off by bacteria, as well as to synthetic signals brewed in the lab.

Her plants are Arabidopsis thaliana, or common mustard cress—roadside weeds that serve as the plant world’s equivalent of lab rats. Here they grow under the care of Andrew Palmer, a biochemist pursuing postdoctoral research with Blackwell. “For hundreds of thousands of years as these plants evolved,” he observes, “they listened to conversations going on among bacteria. They’ve probably figured out a way to pick up on that.” In fact, his experiments show that the plants do respond to quorum-sensing signal compounds isolated from bacteria—whether or not the bacteria themselves are present.

Palmer raises Arabidopsis in different media for different experimental purposes. The plants grow around the lab in soil-filled flower­pots, on solid substrate in petri dishes, and on pieces of paper immersed in nutritional broth inside test tubes on racks.

He holds up a green shoot growing on a transparent substrate that has been treated with a high concentration of a synthetic compound made in Blackwell’s lab. Compared with normal plants nearby, this plant looks stunted and seems to have pulled in its roots, as though avoiding contact with the compound.

“At first I assumed that the compound was toxic,” Palmer says. “But I no longer think so. More likely the plant is showing a very specific response, as though it were growing in soil and then suddenly came upon a really loud bacterial conversation. If you’re a plant and you can’t discriminate as to whether these are good bacteria or bad, it might be a good idea to move your roots to some other spot.”

In a separate study of host-bacterial interactions, Palmer tests the power of quorum-sensing molecules by manipulating the genes that code for them. He gathers his research materials at the farmers’ market near campus, where he buys green beans, carrots, and potatoes. He shows me a potato he sterilized and then inoculated with bacteria that typically eat potatoes. The flesh at the inoculation site has turned “black and gucky,” as Palmer describes the effect. At another inoculation site, where he injected a bacterial strain he had altered by removing the quorum-sensing gene, the healthy white flesh indicates the microbes have lost their appetite for potato. A series of such experiments suggests that virulence can be tuned—turned on or off, exaggerated or attenuated—by modulating the genes for quorum sensing.

“The great accomplishment of Helen’s group,” Palmer explains, “is being able to make these compounds and provide them to researchers. Other plant guys I talk to are amazed. ‘You can make those compounds?’ they say.”

Although none of the synthetic quorum-sensing compounds currently under construction in this campus lab are intended for human use, they clearly have the potential to be important for the treatment and prevention of disease. Blackwell has started a small biotech company in Madison with that as her goal—plotting a future jump in scale from plants to people.