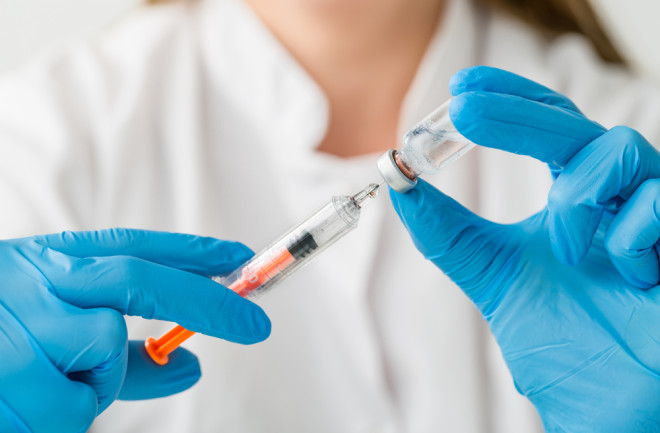 (Credit: REDPIXEL.PL/Shutterstock) The FDA has seized vials of smallpox vaccine from a California immunotherapy company, claiming they had been used for an unauthorized cancer treatment. StemImmune markets an unapproved treatment for cancer involving stem cells and a type of virus commonly used to inoculate against smallpox. The virus, vaccinia, is an attractive option because it's good at getting into cancerous cells and can be genetically tweaked to improve effectiveness. It's not easy to get, however, because it can cause potentially deadly side effects. The CDC strictly controls access to the vaccine, which is normally only given to members of the military and healthcare workers.

According to Stat, StemImmune apparently requested access to the vaccine solely for the purpose of inoculating its employees, who were working with the smallpox virus, but turned around and started giving it to patients to treat cancer. In a statement released Monday, the FDA says they recovered five vials of the vaccine totaling about 500 doses in a raid Monday; one of them had been partially used. The raid followed an FDA inspection of the clinic and comes as part of a larger crackdown on unauthorized stem cell treatments by the federal agency. They have also sent a letter of warning to the Florida-based US Stem Cell Clinic, advising them to stop marketing their controversial treatments. Three women treated at the clinic for macular degeneration have gone blind as a result of the procedure. “I’ve directed the agency to vigorously investigate these kinds of unscrupulous clinics using the full range of our tools, be it regulatory enforcement or criminal investigations," says FDA Commissioner Scott Gottlieb. "Our actions today should also be a warning to others who may be doing similar harm, we will take action to ensure Americans are not put at unnecessary risk."

The vaccinia virus was first used in the 18th century to combat smallpox, and was eventually responsible for eradicating the disease entirely. It's a pox virus, and although it can't cause smallpox, the immune response it generates is sufficient to protect against the disease. Vaccinia usually causes only mild side effects, such as flu-like symptoms and rashes, but can rarely cause dangerous swelling of the heart and surrounding tissues, a condition that can be fatal. The FDA specifically recommends that patients with weakened immune systems, such as the cancer patients StemImmune is treating, avoid the smallpox vaccine.

StemImmune's treatment involves a combination of the virus and stem cells drawn from a patient's own fat tissues. A short description on their website describes the injection as a "Trojan Horse" that slips into cancer cells, relying on the fact that the body should recognize its own stem cells. The company is currently working on early-stage human trials of their treatment, according to the website, although details of those studies are not given.

"StemImmune ... is fully cooperating with the FDA about the development and use of its stem cell-based investigational cancer therapy. Our primary concern has and continues to be the safety and well-being of patients in clinical trials and compassionate use programs. At this time, we are working to understand and address the questions raised by the FDA about the use of our therapy for cancer patients in individual compassionate use programs in clinics. As more information becomes available to us, we will update this statement."

The concept of using the smallpox vaccine to fight cancer is not new, and falls under the umbrella of immunotherapy, a growing discipline in cancer research that involves reconfiguring a patient's immune system to attack tumors. Most tumors shield themselves from the body and grow unmolested, but various emerging tactics are teaching the immune system to fight back. Because viruses specialize in infiltrating cells, they are often used to ferry treatments into tumors. Once there, they can either begin producing cancer-fighting compounds themselves or act as beacons for the immune system, which will begin to fight the tumor itself. As far back as 2003

, this method was being explored, usually with versions of the vaccinia virus genetically modified to seek out cancer cells and cause fewer side effects. Another version

of the therapy used a virus to infiltrate cells and then simply multiply until the cell burst apart. Jennerex, another immunotherapy venture, was exploring a treatment

that involved using the vaccine to get into cells and then signal the immune system to attack. While these and other virus-based cancer treatments were able to produce some promising results — either destroying inoperable tumors or lengthening survival times — they were not always a success, were expensive and could carry side effects.