Even Pills Are Going Digital 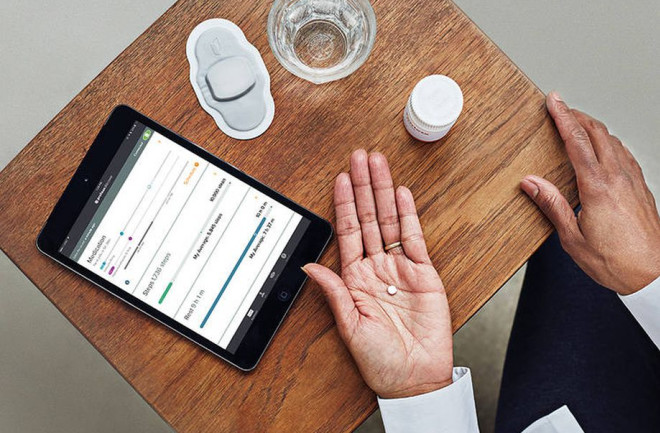 (Credit: Proteus Digital Health) Not following medicine as prescribed can be costly — like $100 billion to $289 billion, as reported by The Atlantic in 2012. Not only that, but it can also harm patients and set back their treatment. But a new digital pill could change that. The Food and Drug Administration (FDA) on Monday approved the first pill in the United States that comes loaded with a digital ingestion tracking system. After taking one of these new pills, the IEM sensor communicates to a patch worn by the patient. The patch then sends information to an app on a smartphone. The treatment, called Abilify MyCite, pairs the sensor with medication (Abilify) used to treat adults diagnosed with schizophrenia, bipolar I disorder and depression. Both parties involved in making this new-age pill — Otsuka Pharmaceutical makes the tablet, Proteus Digital Health makes the IEM and patch — hope this digital medicine system will help patients and physicians improve treatment. “Being able to track ingestion of medications prescribed for mental illness may be useful for some patients,” said Dr. Mitchell Mathis, director of the division of psychiatry products in the FDA’s center for drug evaluation and research, in a news release. “The FDA supports the development and use of new technology in prescription drugs and is committed to working with companies to understand how technology might benefit patients and prescribers.” The pill manufacturers and the FDA are quick to point out that it hasn't been shown that digitizing this pill improves patient compliance. However, it has sparked some worries about granting "Big Brother" the ability to know if you're properly medicated. For example, as reported in the New York Times, insurers may push medical practitioners to prescribe digital pills so they make certain drugs are being used, and being used correctly. A digital scrip might also become a condition for parole or releasing patients from mental health facilities. At this time, these digital pills are only being rolled out to a select number of healthcare plans and providers and patients. However, there are other companies working on their own versions of digitized medicine. Otsuka said the slow roll-out of Abilify MyCite will help them learn from the patient's experiences.