A few months ago I blogged a paper in PLoS Biology which suggested that a common Y chromosomal haplogroup, in fact the most common in Europe and at modal frequency along the Atlantic fringe, is not pre-Neolithic. Rather their analysis of the data implied that the European variants were derived from an Anatolian variant. The implication was that a haplogroup which had previously been diagnostic of "Paleolithicness," so to speak, of a particular population may in fact be an indication of the proportion of Neolithic Middle Eastern ancestry. The most interesting case were the Basques, who have a high frequency of this haplogroup, and are often conceived of as "ur-Europeans," Paleolithic descendants of the Cro-Magnons in the most romantic tellings. I was somewhat primed to accept this finding because of confusing results from ancient DNA extraction which implies a lot of turnover in maternal lineages, the mtDNA. My logic being that if the mtDNA exhibited rupture, then the Y lineages should too, as demographic revolutions are more likely to occur among men. But perhaps not. A new paper in PLoS ONE takes full aim at the paper I blogged above. It is in short a purported refutation of the main finding of the previous paper, and a reinstatement of what had been the orthodoxy (note the citations to previous papers). A Comparison of Y-Chromosome Variation in Sardinia and Anatolia Is More Consistent with Cultural Rather than Demic Diffusion of Agriculture:

Two alternative models have been proposed to explain the spread of agriculture in Europe during the Neolithic period. The demic diffusion model postulates the spreading of farmers from the Middle East along a Southeast to Northeast axis. Conversely, the cultural diffusion model assumes transmission of agricultural techniques without substantial movements of people. Support for the demic model derives largely from the observation of frequency gradients among some genetic variants, in particular haplogroups defined by single nucleotide polymorphisms (SNPs) in the Y-chromosome. A recent network analysis of the R-M269 Y chromosome lineage has purportedly corroborated Neolithic expansion from Anatolia, the site of diffusion of agriculture. However, the data are still controversial and the analyses so far performed are prone to a number of biases. In the present study we show that the addition of a single marker, DYSA7.2, dramatically changes the shape of the R-M269 network into a topology showing a clear Western-Eastern dichotomy not consistent with a radial diffusion of people from the Middle East. We have also assessed other Y-chromosome haplogroups proposed to be markers of the Neolithic diffusion of farmers and compared their intra-lineage variation—defined by short tandem repeats (STRs)—in Anatolia and in Sardinia, the only Western population where these lineages are present at appreciable frequencies and where there is substantial archaeological and genetic evidence of pre-Neolithic human occupation. The data indicate that Sardinia does not contain a subset of the variability present in Anatolia and that the shared variability between these populations is best explained by an earlier, pre-Neolithic dispersal of haplogroups from a common ancestral gene pool. Overall, these results are consistent with the cultural diffusion and do not support the demic model of agriculture diffusion.

Their main trump cards seem to be that they used a denser set of markers, and, they claim they have a more accurate molecular clock. Ergo, in the latter case they produce a better time to the last common ancestor, which is twice as deep as the paper they're attempting to refute. Someone like Dienekes or Polish Genetics can tackle the controversies in scientific genealogy here (I know Dienekes has a lot of interest in mutational rates which go into the molecular clock for these coalescence times). Rather, I would suggest that usage of Sardinians concerns me for an obvious reason: they're genetic outliers in Europe. A lot of this has to do with being an island. Islands build up uniqueness because they don't engage in the normal low level gene flow between adjacent populations because they're...well, islands. You would know about Sardinia's position because they're one of the populations in L. L. Cavalli-Sforza's HGDP sample and they show up in History & Geography of Human Genes as on the margins of the PCA plots. But here's a figure from a more recent paper using a much denser market set, constrained to Southern European populations. I labelled some of the main ones so you'd get a sense of why I say Sardinians are outliers: 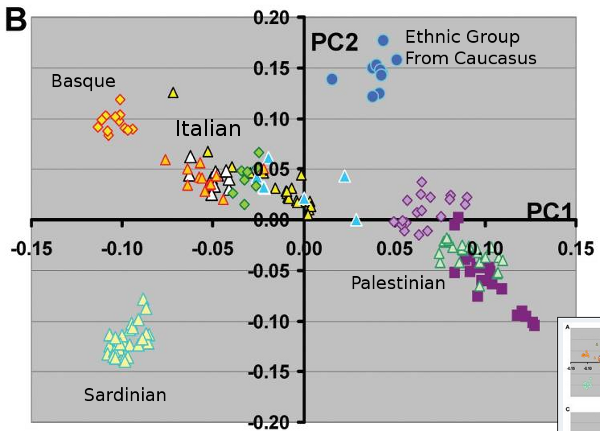 Over the two largest independent dimensions of genetic variation you can see a distribution from the southeast Mediterranean all the way to the northwest (in fact, the Basques are an Atlantic group). The Sardinians are out of the primary axis, and that's why I say they're an outlier. A few other European groups, like the Icelanders and Sami exhibit this tendency. As I suggested above I think the fact that the Sardinians are on an isolated island relatively far from the European and Africa mainland means that they'll "random walk" in genetic variation space toward an outlier status naturally, just as the Icelanders have since the year 1000. So though I grant the authors their rationale for using the Sardinians as a reference against the Anatolian source population, the fact that we know that they're peculiar in their variation in total genome content makes me wary of drawing too many inferences from their relationships to other groups where they are seen as representative of a larger set. Citation:

Morelli L, Contu D, Santoni F, Whalen MB, & Francalacci P (2010). A Comparison of Y-Chromosome Variation in Sardinia and Anatolia Is More Consistent with Cultural Rather than Demic Diffusion of Agriculture PLoS ONE : 10.1371/journal.pone.0010419