For the past few decades there has been a long standing debate as to the origins of modern Europeans. The two alternative hypotheses are: * Europeans are descended from Middle Eastern farmers, who brought their Neolithic cultural toolkit less than 10,000 years ago. * Europeans are descended from Paleolithic hunter-gatherers, who acculturated to the farming way of life through diffusion of ideas. The two extreme positions are not really accepted in such stark forms by anyone. Rather, the debate is over the effect size of #1 vs. #2. Bryan Sykes, a geneticist at Oxford, has been arguing for the primacy of #2 for many years. His argument is most fully laid out in The Seven Daughters of Eve. In short the model is that on the order of 80% of the ancestors of Europeans today derive from Paleolithic hunter-gatherers, while 20% derive from Middle Eastern farmers. Foremost amongst those who argue for #1 would be the famed genetic anthropologist L. L. Cavalli-Sforza. Cavalli-Sforza has objected strongly to Sykes' characterization of his own position, and suggests that the most recent data do not refuse his model in any way. His point is that the "demic diffusion" model simply points to the critical role of demographic advance, and does not positive total genetic replacement. Or, even preponderant effect, seeing as how there will be dilution of the genetic signal along the wave of advance. It is therefore a glass-half-empty vs. glass-half-fully argument. Remember also that Sykes' values are averaged across Europeans, so that the signal of Middle Eastern farmers would be greater in southeast Europe than in the British Isles. Of course there are some methodological issues here; Sykes' argument relied on mitochondrial DNA, passed only through mothers. Cavalli-Sforza initially relied on classical autosomal markers, though his group later focused on Y chromosomes, passed through males. Some workers have found values closer to 50% for Middle Eastern contribution. And most importantly, DNA extraction techniques are suggesting that inferences made from contemporary patterns of variation may not give us an accurate map of past patterns of variation. These techniques are coming together and suggesting that in fact European hunter-gatherers left a much smaller contribution to the ancestry of modern Europeans than Sykes et al. have inferred. In this unsettled landscape comes a new paper which turns some assumptions about Y chromosomal variation in Europe on its head. The focus is on a subclade of the R1b haplogroup, which has its highest frequencies in Western Europe, in particular along the Atlantic fringe. The pattern of variation has led many to infer that this lineage, in particular the R1b1b2 haplgroup, is a marker of the Paleolithic populations of Western Europe. The high frequency of this marker among the Basques in particular is seen as evidence of this, because this group speaks a language which is a pre-Indo-European isolate (the Basques are used as a Paleolithic reference group in many papers). But perhaps not. A Predominantly Neolithic Origin for European Paternal Lineages:

The relative contributions to modern European populations of Paleolithic hunter-gatherers and Neolithic farmers from the Near East have been intensely debated. Haplogroup R1b1b2 (R-M269) is the commonest European Y-chromosomal lineage, increasing in frequency from east to west, and carried by 110 million European men. Previous studies suggested a Paleolithic origin, but here we show that the geographical distribution of its microsatellite diversity is best explained by spread from a single source in the Near East via Anatolia during the Neolithic. Taken with evidence on the origins of other haplogroups, this indicates that most European Y chromosomes originate in the Neolithic expansion. This reinterpretation makes Europe a prime example of how technological and cultural change is linked with the expansion of a Y-chromosomal lineage, and the contrast of this pattern with that shown by maternally inherited mitochondrial DNA suggests a unique role for males in the transition.

Let's look at Figure 1 first to see how they get to their conclusion.

The first panel shows the standard SE-NW expansion of agriculture. The second the west-east decline in R1b1b2 frequency. These I've been aware of, and the patterns pointed to the inverse relationship between agriculturalists and R1b1b2. But the third panel points to something different. It shows the correspondence of variation in R1b1b2 with panel A. This is counterintuitive in light of our previous assumption. Regions where lineages have been extant the longest should have the highest variation. This is the insight which allows researchers to be confident that modern human beings emerged from Africa within the last 50,000 years or so; Africa has by far the most genetic variance of any region of the world. By contrast, the New World has the least. This is because serial bottlenecks from population A → B results in a loss of information, like serial photocopying. Genetic drift results in the extinction of many lineages, and the stochastic rise in frequency of a few lineages. In other words, in this model the high frequency of R1b1b2 in Western Europe is a function not of that marker's long residence in that region, but a rapid population expansion of the lineage from a small group of founders, whereby other lineages simply went extinct due to stochastic factors on the wave of advance. Here's a graphic illustration of how the variation relates to geography. Remember that R-squared is the % of the variation of Y which can be explained by variation of X. 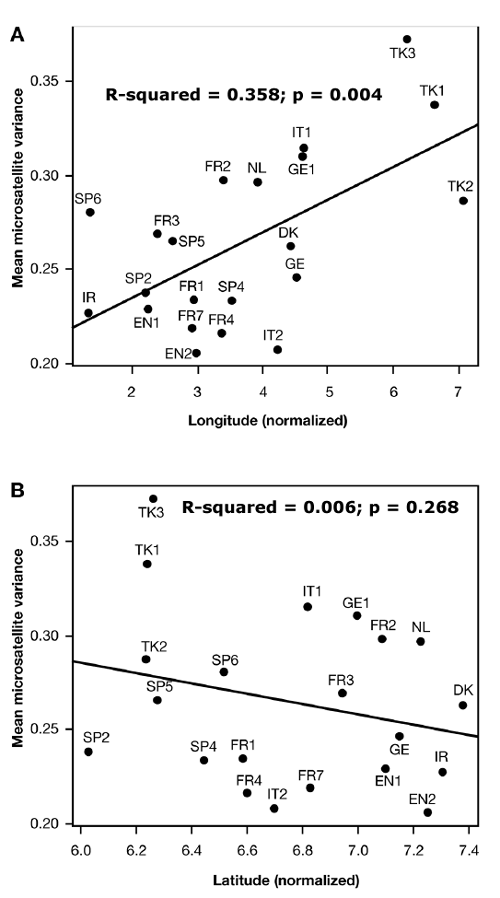 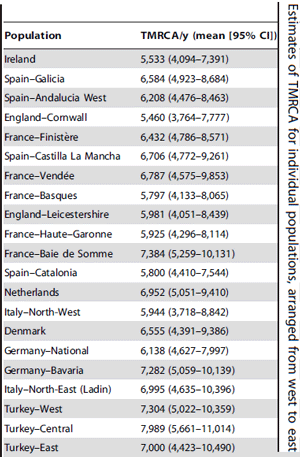 But probably the clincher has to be their calculations of "The Most Recent Common Ancestor" (TMRCA) of the individual lineages of R1b1b2 within the various populations. These data seem to suggest that it is in Turkey that R1b1b2 has the most time depth; that is, from the founding of the lineage via its unique mutations there was diversification over time. When new populations are founded they tend to only reflect a small proportion of the variation, so the TMCRA will be a lower value because there is a shallower time depth to the populations for them to build up new mutations. But take a look at the 95% confidence intervals. There's a lot of overlap, and though it is nice that the trend fits expectations, that is, regions with more R1b1b2 diversity should be those where there's more time depth to build up that diversity, there have been so many flip-flops in this area that people will probably question dating here. One issue to note is that it seems likely that if the model presented here is true, that R1b1b2 is newcomer from the Middle East which rapidly expanded in frequency across Western Europe, it's going to be hard to getting the clarity you need from molecular clock based methods because the demographic processes occurred rather rapidly. We know from archaeology that agricultural societies could sprout up almost instantaneously, as if they simply transplanted their culture to new locales. Some of this likely occurred via sea, using the Mediterranean and the Atlantic fringe. The authors point out that in places like Japan and India there is a great deal of circumstantial evidence for agriculture resulting in the expansion of particular lineages, so the preponderance of acculturation in Europe as the mode of transmission seems atypical. Though I don't see citations to the recent DNA extraction results which have unsettled historical population genetic orthodoxy, I think that should also change our priors a bit in terms of whether we should give much weight to this particular result. New data from India, which posits a hybrid autosome, predominantly recent exogenous Y lineages, and indigenous mtDNA lineages, may serve a model for Europe. The authors here do not reject that mtDNA is predominantly indigenous, so they posit that agriculture spread with male lineages from the Middle East who intermarried with the daughters of locals. One analog might be the emergence of mestizos in the New World, who have predominantly European male lineages and native female lineages. Finally, one question a friend brought up:

if the higher frequency of R1b1b2 is a function of the wave of advance, why is it the same haplogroup all along the wave front?

Standard population genetic theory tells us that fragmented small groups will tend to lose genetic diversity and fix particular alleles, but those alleles are not going to be the same. It seems that it is more plausible that there were serial bottlenecks through coastal migrations, and eventually these expanded inland once they stumbled onto the northwest European plain. But that's just speculation. Update: Also see Dienekes, I assume there'll be a robust discussion thread on this paper.... Citation: Balaresque P, Bowden GR, Adams SM, Leung H-Y, King TE, et al. (2010) A Predominantly Neolithic Origin for European Paternal Lineages. PLoS Biol 8(1):e1000285. doi:10.1371/journal.pbio.1000285