Last week I quipped on twitter that epigenetics had started to become the scientific deus ex machina of our age, a phenomenon which offered the potential for boundless explanatory power. In the past I have felt that sexual selection and random genetic drift have fulfilled the same roles as one-size-fits-all-explanations at the service of all. The critiques of adaptationism have taken hold broadly, but in lieu of that old-standby it seems that people naturally go seeking other theoretical gurus instead of admitting ignorance as to the nature of things. Like sexual selection and genetic drift, perhaps more so, epigenetics has made the leap from the pages of Science, Nature, and Cell, to the more humane domains. I became very conscious of this when by chance I ran into someone with a past affiliation with the literary journal n + 1, and they asked me about epigenetics when they became aware of my interest in genetics. And today, I notice that the magazine The New Atlantis has an article in its latest issue titled "Getting Over the Code Delusion". Here's the blurb on the front page: "Steve Talbott on epigenetics and the demise of DNA as destiny." Lest you think that The New Atlantist is selling Left-wing Blank Slatism, here's the summary from Wikipedia:

The New Atlantis, founded in 2003, is a journal about the social and political dimensions of science and technology...Published by the conservative Ethics and Public Policy Center in Washington, D.C., the journal is a quarterly, and consists of serious essays on a variety of science and technology issues as well as a summary of recent events produced by the editors. The journal has earned a reputation as a traditionalist conservative publication...Conservative writers Leon Kass and William Kristol have both been published in its pages. It is edited by technology expert Adam Keiper, having formerly been edited by conservative writer Eric Cohen.

If Mike Lynch and Jerry Coyne have fits over Sean B. Carroll's love affair with gene regulation at the expense of old fashion sequence variation, I wonder how they'll view the inflation of epigenetics which is liable to get more out of control before people begin to gain a sense of perspective. I see on Amazon there are already some suspect titles trying to use epigenetics as stepping stones. For example, Happiness Genes: Unlock the Positive Potential Hidden in Your DNA. One of the blurbs:

"Combining recent studies showing the epigenetic effects of changing our beliefs and behaviors with the wisdom of ancient spiritual traditions, Happiness Genes is a wide-ranging survey of the science of happiness. It asks the reader provocative questions, like considering how our behaviors might be affecting the genetic expression of our children. Baird and Nadel show you how to inventory your 'happiness assets,' those relationships, possessions and situations that contribute to your happiness, and then treat them like the valuable resource that they are. Wise and practical, the book is peppered with self-reflection exercises, and ends with a 28 day program that guides you in cleaning up everything in your life that stands between you and happiness. To understand the links between what happiness looks like at the molecular level in our cells, the happiness of entire nations, and how you can take lessons from everything in between to raise your own happiness level, this book is an excellent guide." --Dawson Church, best-selling author of The Genie in Your Genes

Let's get a quantitative measure as to the rise of epigenetics. To do so, I wanted to look at the terms epigenetic, sexual selection, and genetic drift. I checked to see how often they appeared in titles of articles between 1999 and 2009 in Google Scholar (I excluded patents). I couldn't find an easy way to limit years appropriately for general news archives, so I decided to look at Google Blog Search. The main issue here though is that the number of blogs, and Google's index, has been growing over the whole 2000s. So what matters for the second chart is the relationship between the three terms, not the absolute values. Again, I looked at post titles. 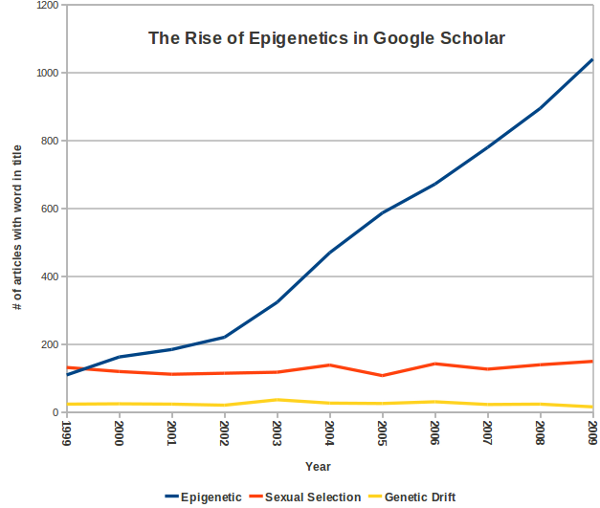 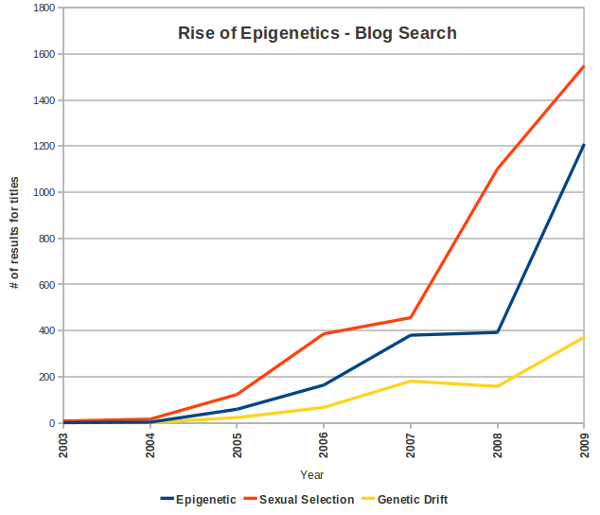 First, no surprise that genetic drift has the least traction. It's a background dynamic, just an instantiation of sampling variance. In the scientific literature it does look like titles with epigenetics are rising in a linear fashion. In contrast you basically see a uniform distribution for sexual selection. But the the blog title results show something different: sexual selection still beats out epigenetics. Remember not to focus on the steep trendline, that's probably an artifact of the rise of the science blogosphere and the thoroughness of Google's index. Is this plausible? Yes. There are 18 hits for epigenetic in The New York Times between 1999 and 2010. There are 43 hits for sexual selection. The values for the print edition of The Economist during that period are 10 and 17. Why is sexual selection so popular despite the fact that not that much revolutionary is going on in the science? Generally I think anything to do with selection has appeal as an explanation because of a connection to Charles Darwin. Additionally, sexual selection has something to do with sex, and that makes great copy. Articles about sexual selection offer up the opportunity for nice visuals. In contrast epigenetics gives you the chance to illustrate a methyl group. What about epigenetics and the future? I really hope the science progresses further. Until we know its limits and bounds we won't hear the end of neo-Lysenkoists on the Left and the Creationists on the Right. That's not to say that Steve Talbott is either, though I can't judge as you can't read his article online. And certainly it is fair to point out the possible implications of epigenetics in terms of how the phenomenon may make us reevaluate the nature of the heritability of traits. But part of the reason is that we are only now beginning to understand the science. On a coarse phenotypic level I'd bet that epigenetics doesn't overturn everything we know, rather, it will modulate on the margins. Image Credit: Jen Philpot