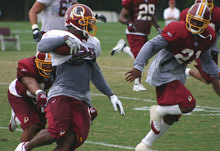 The regular collisions and concussions that take place on the football field may have a cumulative effect on the players' brains, according to several new studies. In one small study, researchers found that just a few concussions can have an impact on cognitive skills 30 years later, while the other, more dramatic study found that a deceased NFL player was suffering from a severe degenerative brain disease. Taken together, the studies add to the mounting evidence

that repeated blows to the head in football games lead to debilitating later-life afflictions such as dementia [Washington Post].

The biopsy of the NFL lineman Tom McHale, who played from 1987 to 1995 and who died last May at the age of 45, was announced at a press conference timed to coincide with the preparations for the Super Bowl this Sunday. The biopsy showed that McHale was suffering from chronic traumatic encephalopathy, researchers said.

Known as C.T.E., the progressive condition results from repetitive head trauma and can bring on dementia in people in their 40s or 50s. Using techniques that can be administered only after a patient has died, doctors have identified C.T.E. in all six N.F.L. veterans between ages 36 and 50 who have been tested for the condition, further evidence of the dangers of improperly treated brain trauma in football [The New York Times].

McHale died of an accidental overdose of cocaine and painkillers, but his wife said at the press conference that she now wonders if he turned to drugs and spiraled downward because of brain damage.

CTE can cause victims to lose control of their emotions and impulses and to suffer memory loss and depression and can eventually lead to dementia [ESPN].

While the results of the six biopsies of NFL veterans have not yet been published in a scientific journal, the researchers say they're preparing an article for this spring. In a separate study, researchers found that college players who had just a few concussions ended up with mild cognitive and memory problems decades later.

The slight deficits resulting from one or two concussions were similar to problems found in patients with the early stages of dementia, although they did not interfere with the daily life of the otherwise healthy men, researchers reported in the journal Brain. "They were all very functional, working, still playing sports, and really in good health," said senior author Dr. Maryse Lassonde.... "It is only when we compare them to people who did not have concussions that the problems come up" [Los Angeles Times].