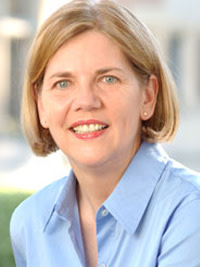 It has come to my attention that Elizabeth Warren, who is running for a Senate seat in Massachusetts, claims Native American

ancestry. This did not surprise me. Warren is from Oklahoma

, where nearly 10% of the population

claims some Native American ancestry. The problem, as it is, is that apparently Harvard claimed Warren as a minority faculty member during its periodical head counts. Warren "was told through family lore that her maternal parents were from the Cherokee and Delaware tribes." This is a moderate problem: family lore often is inaccurate. And it also exhibits biases. Nevertheless, I do think we need to be careful about being too skeptical in this case, because of Warren's roots in Oklahoma. A friend was told that his maternal grandmother was of part Oklahoma Choctaw background, and he had always dismissed this as romantic distortions made to fit 21st century preconceptions and preferences. But when he got his results back from 23andMe there was a notable "Asian" component, and the Native American relative finder came back positive. He asked me to look at his results more deeply, and it was pretty obvious that yes, he was part Native American, in actually the proportions that you would have expected. But this doesn't always work out. It seems the majority of white Americans who suspect Native American ancestry find none from what I can tell. Recently I received a copy of DNA USA: A Genetic Portrait of America

"Will's Navajo and "Roger's" Hopie chromosomes contrast dramatically with the final portrait in this room from my one and only CHerokee volunteer, "Lucas Jackson." I was astonished when I first saw his chromosome portrait, and so was he. "Isn't that something!" he said with quiet amazement. There is only one small segment of orange ["Asian" ancestry in 23andMe's ancestry painting] among an otherwise uniform sea of blue. I would have dismissed this as an error were it not for somethign Mike MacPherson said when I visited him in San Francisco [scientist at 23andMe]. He had evidently had a similar experience with the company's Cherokee customers, and had often found very little sign of orange [ie., non-European] in their chromosome portraits. We did not discuss the "Cherokee paradox," as MacPherson called it, any more than that, but it did make me think that perhaps "Lucas Jackson's portrait was no so unusual for a Cherokee.

If Elizabeth Warren wants to validate genuine Native American ancestry, she can surely afford a personal genomics service to dig through her genome. There needn't be textual documentation.