Eating Breakfast Might Not Matter When It Comes to Weight Loss

Break your fast or go hungry — a new study says a morning meal has little effect on weight loss. 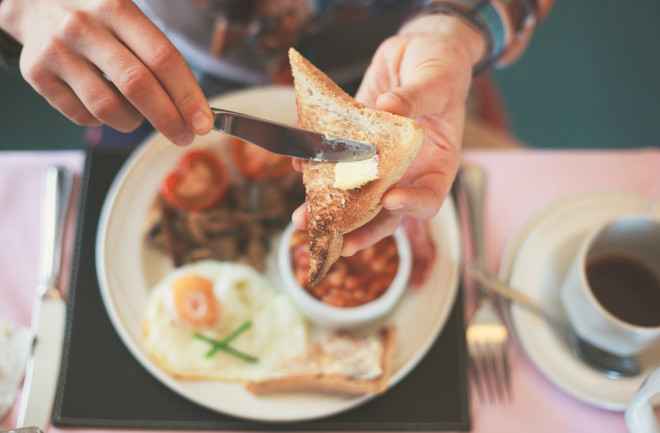 There are two kinds of people in this world: those who eat breakfast and those who skip it. Maybe that’s exaggerating things a little, but the debate over whether or not adults should eat The Most Important Meal of the Day, especially for weight loss, can be polarizing — and not just for the average person. Researchers, too, have been arguing this point for years.

Now, a new literature review says there’s a possibility that eating breakfast might not help us shed pounds.

Over the years, the yays have argued that a morning meal can help us avoid overeating later in the day, ultimately causing us to lose weight. Meanwhile, the nays have shrugged off its supposed importance.

To try and figure out if they yays or nays have it, the review, published in The BMJ by a team from Monash University in Melbourne, combed through 13 studies from the past 28 years. Some of these studies focused on how either skipping or eating breakfast impacted participants’ body weight; others looked at the relationship between eating in the morning and energy intake each day. The trials lasted anywhere from 24 hours to 16 weeks and included people who either religiously ate breakfast or skipped it, and also people who fell somewhere in between.

The team found that, overall, people who ate breakfast had a higher total daily energy intake, eating an average of 260 calories more than those who passed on the meal. And actually, the review showed that those who skipped breakfast generally weighed nearly a pound less than their breakfast-eating counterparts. Additionally, breakfast foregoers also tended not to feel any hungrier and had no major differences in the amount of energy they expended than those who regularly chowed down in the morning.

However, there’s a caveat to these findings. The authors warn that the studies they looked at varied in terms of quality, so people should consider the trends their review found with caution.

Still, you work with what you’ve got. And, though the authors recommend more rigorous studies in the future, the possibility that breakfast might not help with weight loss is worth considering. “Although eating breakfast regularly could have other important effects, such as improved concentration and attentiveness levels in childhood,” they write in their conclusion, “caution is needed when recommending breakfast for weight loss in adults, as it could have the opposite effect.”