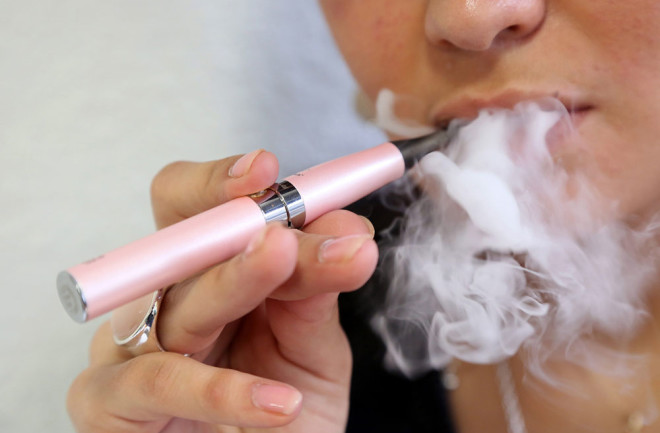 Liquid nicotine in e-cigarettes is vaporized and inhaled. The devices have been shown to produce more ultrafine particles than cigarettes. | Sebastien Nogier/EPA/Corbis

Their popularity soaring, electronic cigarettes came under intense scrutiny by health researchers and regulators in 2014, even as the world’s biggest tobacco companies made moves to profit off them.

E-cigarettes deliver nicotine by vaporizing a nicotine-loaded liquid rather than burning tobacco. Sales of the product had already jumped from a mere 50,000 sold in 2008 to 3.5 million in 2012. By 2014, a British study found that just over half of smokers there had used e-cigarettes.

But despite the claim that e-cigarettes offer a healthier alternative to smoking, the Centers for Disease Control and Prevention reported in April that the number of calls to poison centers involving e-cigarettes jumped from a single call per month in September 2010 to 215 calls per month in February 2014. Nearly 6 in 10 of those calls involved people younger than 20, and 51 percent of the total calls involved kids younger than 5.

Even when properly used by adults, e-cigarettes have been shown to have immediate adverse effects on respiratory function. They produce more ultrafine particles than cigarettes do, and they cause the same reduction in the amount of nitric oxide exhaled by users — a consequence long associated with smoking’s harmful cardiovascular effects.

Not all the health news was bad: A survey of smokers who tried to quit found they were 63 percent more likely to succeed if they switched to e-cigarettes than if they used either nicotine gum or patches, or relied on willpower alone. In all, 20 percent of the smokers reported that they had stopped smoking conventional cigarettes if they used e-cigarettes, compared with 10.1 percent using over-the-counter nicotine replacement aids and just 15.4 percent who went cold turkey.

Still, the overall picture looks bleak to researchers like Stanton Glantz, director of the Center for Tobacco Control Research and Education at the University of California, San Francisco. “We’re on a very bad trajectory,” he says. “They’re being marketed extremely aggressively in ways that are rapidly penetrating the youth market.”

But just as the world’s two largest tobacco manufacturers, Reynolds American (maker of Camel) and Altria (maker of Marlboro) were entering the market, the FDA announced its intention in April to regulate e-cigarettes as it does traditional cigarettes — including age restrictions and health warnings.

The Benefits of CBD Oil