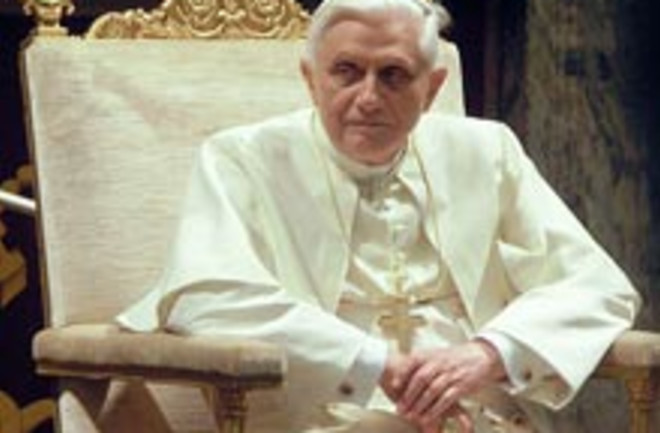 Before his plane even touched the ground, Pope Benedict XVI sparked a controversy on his first trip to Africa by denouncing the use of condoms and saying they even exacerbate the AIDS crisis. Despite insisting that the church is in the forefront of the battle against AIDS in Africa [AP], during his flight to Cameroon the Pope told reporters that AIDS is "a tragedy that cannot be overcome by money alone, that cannot be overcome through the distribution of condoms, which can even increase the problem" [BBC]. Instead, the solution lies in a "spiritual and human awakening" and "friendship for those who suffer" [AFP]. The seven-day pilgrimage is Benedict's first trip as pontiff to Africa, the fastest-growing region for the Roman Catholic Church [AP]. But the Vatican's controversial policy on condoms continues to be tested on a continent where AIDS has killed more than 25 million people since the 1980s [Reuters]. With an estimated 22 million people currently infected on the continent, Africa is home to approximately 67 percent of the world's population living with AIDS, and claimed a full three-quarters of all AIDS deaths in 2007. To prevent the spread of HIV/AIDS, the Catholic Church encourages sexual abstinence and fidelity, directly contradicting the efforts and advice of medical workers, who promote condoms as the most effective method of prevention. But the Pope's remarks were not unprecedented. In 2005, during an address to African bishops visiting the Vatican, Benedict said, "It is of great concern that the fabric of African life, its very source of hope and stability, is threatened by divorce, abortion, prostitution, human trafficking and a contraception mentality" [The Guardian].

The comments have sparked outrage among international AIDS activists, as well as among people on the continent. "I am glad that he is coming but he should be here for religion and not other things," said 29 year-old Calvine Noumbisi, who squatted on the side of the road [in Cameroon], selling rosaries, prayer books and incense rocks for a nearby church [

Reuters]. Rebecca Hodes, who works for an AIDS campaign group in South Africa, said, "his opposition to condoms conveys that religious dogma is more important to him than the lives of Africans" [The Guardian]. Related Content: 80beats: If Everyone Got an Annual AIDS Test, Could We Beat Back the Epidemic? 80beats: South African Health Minister Breaks With Past, Says HIV Causes AIDS 80beats: Genetic Trait Makes Africans Especially Prone to HIV Infection 80beats: HIV Virus Took Hold in Humans 100 Years Ago, in Africa’s Colonial Cities