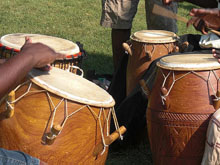 Lots of occupations come with hazards: mercury poisoning for haberdashers, carcinogenic chemicals for nail salon workers, paper cuts for envelope-stuffers.For professional drum-makers, the danger could be Anthrax.A drum-maker in London has been hospitalized and is in serious condition after inhaling anthrax spores from the animals hides used in his craft.

Anthrax infections used to be known as wool sorter’s disease because the anthrax bacteria, Bacillus anthracis, typically infect grazing animals.When the animals die, the bacteria can form dormant spores that can cling insidiously to hair, biding their time until a new host comes along.Since drum-makers often use animal skins that have not been chemically treated, they’re easy targets for these spores.Authorities say, however, that the risk of infections from just playing the drums is very low.

While anthrax infections from skin contact cause nasty black pustules, they are usually treatable with antibiotics.More dangerous is inhaling the spores, which can cause infections in the lungs, flu-like symptoms, blood poisoning, and sepsis.The unfortunate London drum-maker and seven people who have been in close contact with him are currently being treated with antibiotics.

And this case isn’t a fluke—there have been a handful of similar cases reported in the last two years. In 2006, a drummer in Brooklyn, NY (who made his own drums) was hospitalized but later recovered, while a less fortunate drum-maker in Scotland died.In 2007, two non-fatal cases were reported in Connecticut and Vancouver.So the next pandemic may be just as likely to emerge from a bongo as from a laboratory flask or suspicious letter.