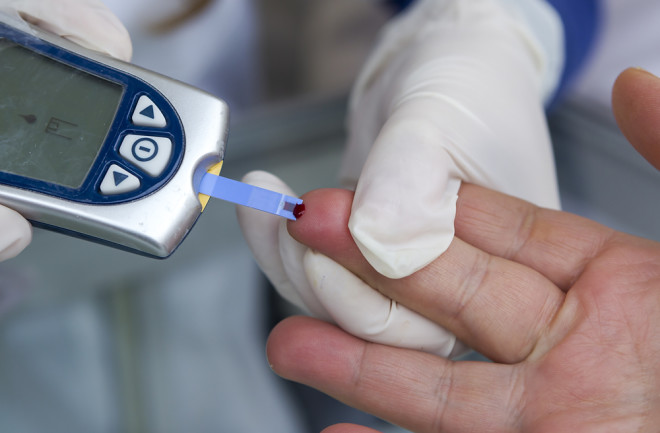 Blood sugar testing. Image courtesy of Ververidis Vasilis / shutterstock As a sugar-rich foodstuff, jelly is not often seen as a good thing for diabetics. But a new gel-based method for administering drugs could cut back on injections for diabetics and virtually eliminate their blood sugar highs and lows. Scientists have come up with a new gelatinous drug form that releases a slow but regular dose of an insulin-regulating hormone. In mice, it kept glucose levels down for five straight days---120 times longer than the hormone alone. And the method could be used to deliver drugs to treat cancer and other diseases as well. Peptide drugs are an up-and-coming method used to treat a number of diseases. There are currently 40 peptide drugs on the market, and 650 more are being clinically tested, so the pharmaceutical industry is investing a lot in the future of these treatments. One peptide drug, used to treat diabetes, relies on weekly injections of tiny plastic capsules filled with the peptide that causes insulin to be released slowly over the course of the week. This means far fewer injections than diabetics' typical insulin regimen, but the injections are painful due to the large needles required to fit the capsules. Side effects like nausea are common. Plus the production is complicated because the drug and its capsule must be synthesized separately and then combined. Researchers have now figured out a way to avoid the painful injection and keep the slow release of the hormone. They began by fusing glucagon-like peptide-1, a hormone that regulates the release of insulin, with a heat-sensitive polymer. This amino acid chain was injected under the skin of mice. It entered as a liquid, but when the polymers came into contact with body heat, they formed a gel. Enzymes in the skin then attacked the gel, releasing copies of the peptide in a slow but steady stream. The drug's effects lasted five days, which is 120 times longer than an injection of the peptide alone, the researchers reported today in Proceedings of the National Academy of Sciences. Future research could make it last even longer. Since the gel is nothing more than a peptide fused with a polymer, production is simple. Both peptides and polymers are made of amino acids, so engineered bacteria can pump out one long chain that contains the drug and its vehicle, without any laboratory synthesis at all. And researchers can genetically encode the drug's release instructions along with it. Diabetics aren't the only ones who could benefit from such a system. The new gel-based method could have far-reaching implications for the whole spectrum of peptide drugs in the future, including those that treat cancer and other diseases.