Dominance, the social construct that confuses

A story in The Los Angeles Times seems to point medical implications of being a sickle cell carrier, Sickle cell trait: The silent killer:

At least 17 high school and college athletes' deaths have been tied to sickle cell trait during the past 11 years. The group includes Olivier Louis, a player at Wekiva High School near Orlando, who died on Sept. 7, 2010, following his first football practice. 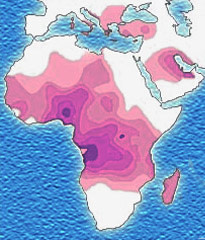 You have surely heard about sickle cell anemia. It is a recessive disease which expresses in those who carry two sickle cell alleles. T-boz of TLC has the disease for example due to her homozygosity. But the allele also famously confers some resistance against malaria, which explains its concentration in regions which have historically been malarial. Sickle cell is arguable the classic case of heterozygote advantage driving the emergence of a recessive disease. The frequency of the allele is balanced at the equipoise between the proportion of people who are more susceptible to malaria if its proportion is too low and those who express sickle cell anemia if its proportion is too high. This advantage is obviously context sensitive. The standard assumption is that in a non-malarial environment selection pressure against anemia will drive the frequency of the allele down over time as heterozygotes don't impose a floor in the proportion of the mutant allele. This seems to have occurred among African Americans, they're ~80% West African, but their frequency of the sickle cell anemia allele is less than {0.80*(the West African proportion)} from what I know (remember that the median number of generations which an African American's black ancestors have been in the USA is probably ~10). But this ignores the reality that there's more to heterozygote advantage than just advantage. When talking about the genetics of recessive diseases as a first approximation it makes good sense to focus on the dominance-recessive dichotomy. You're fixated upon the disease which expresses in the homozygotes. But quite often the heterozygote also exhibits some phenotypic deviation from the "wild type" homozygote. Just not enough to pass the threshold of notice for a medical geneticist. The stories above were all in abnormal situations, as the body was pushed toward its physiological limits. Heterozygote carriers of sickle cell may start deviating from the phenotype of wild type homozygote only at the tail of the range of likely environments, but it still goes to show that "dominance" of the wild type is contextual. It's convenient terminology which has an obvious meaning and allows us to model the world efficiently with a minimum of cognitive overhead, but it's a construct of our making mapped onto the distribution of reality. Another issue is that the same locus may have dominant and recessive effects on different traits. Most genes have many effects, so in some dimensions it will be dominant and in others it will be recessive. Additionally in many it will be additive. There is some evidence for example that the genes which are implicated in the recessive expression of blue eyes in Europeans may have an additive effect on skin color toward lightening, with a slight dominance bias perhaps. In other words, the expression levels of melanin controlled by these loci in the eye manifest recessively in terms of down-regulation, but express somewhat dominantly in relation to down-regulation! So very similar phenotypic consequences in the same trait value direction have different dominance deviations in different tissues. This brings me to the broader issue: dominance can be an artifact of the social construction of the trait. For example, eye color is generally "binned" into distinct categories. That's because that's how human perception seems to work on a cognitive level. This is also true for skin color, but there is more texture and nuance in description, likely because of the larger perceptual target of the trait. Therefore it's not surprising that scientists have developed methods for measuring lightness or darkness of skin on a quantitative scale using reflectometers. Whether you bin traits into categories or measure them on a continuous scale may change our understanding of genetic inheritance. 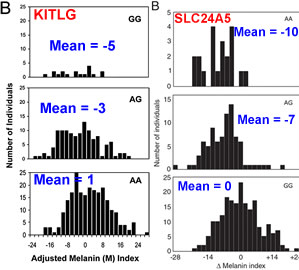 Skin color is an easy character to illustrate this because as humans we're cued toward it, and, its genetic architecture has been well elucidated. Two genes have variants which explain most of the between population difference between Africans and Europeans in pigmentation, SLC24A5 and KITLG. To the left you see charts which show the effect of the variants on the distribution of complexion in sets of African Americans. The researchers used a quantitative index of complexion, where lower values represent lighter skin color. Since African Americans are ~20% European in ancestry they have skin lightening alleles segregating within their population, and so are an ideal population to test the effects of these variants. The top panels show individuals who carry two copies of the European/light allele, the bottom panel individuals who carry two copies of the African/dark allele, and the middle panel heterozygotes. Observe that the heterozygote seems to exhibit a value closer to the European/light homozygote than the the African/dark homozygote! This finding is replicated on both of these genes. There need to be proper caveats in not over extrapolating from one particular context (the effect size may be influenced by genetic background, so substituting the same genotypes into a European-Asian admixed population may lead to differing results). But, is there a general perception that light skin is dominant to dark in inheritance? In the West of course not. That's because social paradigms shape our perceptions. In the United States Salma Hayek, Thandie Newton, and Gabrielle Union are all "actresses of color," despite their objective difference in complexion. That's due to a social norm where everyone is first binned into white vs. non-white (before non-whites are further subdivided), with a high threshold for what counts as white. When you reframe the argument in this way then the fact that Thandie Newton's complexion on a reflectometer may be closer to her English father than her African mother has less weight than the fact that she is not white-skinned, period. Dark is dominant to light purely as an artifact of social norms which sharply constrain what counts as light. This cognitive and cultural filter looms large in sciences which require a layer of abstraction between raw description and explanatory models. To a great extent this applies to all sciences. We need models and approximations to make sense of the data mess. In the case above with sickle cell trait confusions engendered by this human "middle-ware layer" can be deadly, giving the false perception that heterozygotes who carry a disease allele are functionally equivalent to homozogytes. For all practical purposes they probably are. Most humans aren't going to engage in sporting activities to such an extent that the differences between wild type and carrier are going to manifest on the margins of the environmental distribution of exposure. But on an individual level awareness of carrier status and its possible functional relevance may be important in the era of personalized medicine. The medical relevance of this discussion also illustrates that just because something is socially constructed doesn't mean that it doesn't have concrete consequences and utility. Dominance is to a great extent a coarse category which we map onto reality for the sake of our own comprehension. It has great upsides, in terms of differentiating between carriers and non-carriers, and highlighting the risk of recessive Mendelian diseases expressing when two carries come together (e.g., cystic fibrosis). Just because it's a construct doesn't mean we should discard dominance, we just need to keep it in perspective, and understand that it's not "real" in a deep fundamental sense. Then again, I don't think mathematics is "real" either. But it's awful useful, isn't it? You'll probably accede to that if you're not a Platonist.