A friend pointed me to this fascinating article about stray dogs in Moscow:

... It has become a symbol for the 35,000 stray dogs that roam Russia's capital - about 84 dogs per square mile. You see them everywhere. They lie around in the courtyards of apartment complexes, wander near markets and kiosks, and sleep inside metro stations and pedestrian passageways. You can hear them barking and howling at night. And the strays on Moscow's streets do not look anything like the purebreds preferred by status-conscious Muscovites. They look like a breed apart. ... They also acted differently. Every so often, you would see one waiting on a metro platform. When the train pulled up, the dog would step in, scramble up to lie on a seat or sit on the floor if the carriage was crowded, and then exit a few stops later. There is even a website dedicated to the metro stray (www.metrodog.ru) on which passengers post photos and video clips taken with their mobile phones, documenting the savviest of the pack using the public transport system like any other Muscovite. Where did these animals come from? It's a question Andrei Poyarkov, 56, a biologist specialising in wolves, has dedicated himself to answering. His research focuses on how different environments affect dogs' behaviour and social organisation. About 30 years ago, he began studying Moscow's stray dogs. Poyarkov contends that their appearance and behaviour have changed over the decades as they have continuously adapted to the changing face of Russia's capital. Virtually all the city's strays were born that way: dumping a pet dog on the streets of Moscow amounts to a near-certain death sentence. Poyarkov reckons fewer than 3 per cent survive. 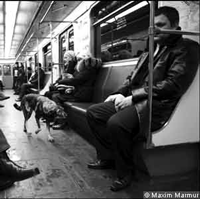 What the author goes on to describe is a bit more interesting than the typical "pariah dog". The descriptions of particular wild behavioral morphs seem reminiscent of the sort of evolutionary change one would expect from post-domesticates in an post-apocalyptic world. This is possibly the other side of the domesticated silver fox experiments, though it must be noted that contemporary dog breeds themselves exhibit a very wide range in behavioral orientations, so the Moscow strays may simply be reflecting extant variation.