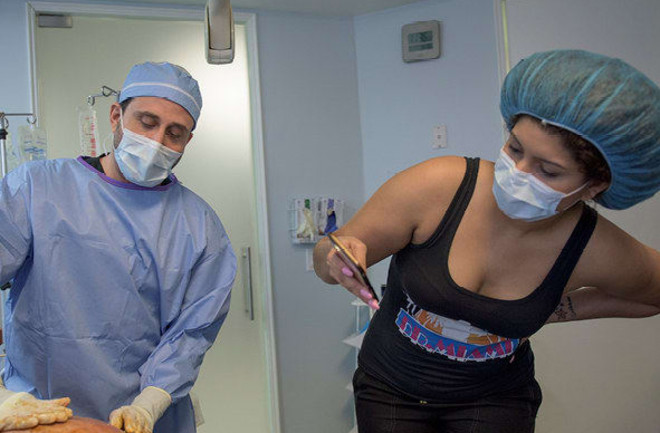 (Credit: therealdrmiami/Snapchat) To thousands of dedicated followers on Snapchat and Instagram, he's Dr. Miami, a plastic surgeon who has made a name posting sometimes graphic videos from inside the operating room. Paired with rap music, quirky antics and bad jokes, the Miami-based surgeon has become a brand unto himself, with a waiting list stretching into the years, an appearance on the Today show and legions of fans. But the American Society of Plastic Surgeons would like him to stop, please. A new code of ethics authored by doctors at Northwestern Medicine sets out recommendations for sharing videos of plastic surgery operations on social media, emphasizing the importance of professionalism and expressing concern over the possibility of patients being taken advantage of.

"This the first step in taking the circus tent down and developing ethical rules for making and sharing plastic surgery videos," said senior author Dr. Clark Schierle, a plastic surgeon and faculty member of Northwestern University Feinberg School of Medicine, in a press release. "There is increasingly vulgar content by a growing number of plastic surgeons that is not in the best interest of the patient." The trend has been going on for several years now. Dr. Miami, his real name is Michael Salzhauer, has been posting Snapchat videos from the operating room since 2015, and other doctors have followed suit. Salzhauer even offers social media training for doctors, and, for a fee, will feature other plastic surgeons on his popular social media feeds, according to Buzzfeed.

(Credit: therealdrmiami/Snapchat) His own branding efforts include daily Snapchat stories of real surgeries, before and after photos from the operating room covered with emojis, and images of the doctor and an assistant posing with curtains of excised fat. The patients have all signed written waivers indicating their consent, but the ASPS worries that they may not understand what exactly they're signing up for, and that the images could be shared far beyond what they intend.

In their paper, which was based largely on a review of previous literature and the four principles of medical ethics (respect for patient autonomy, promoting what is best for the patient, doing no harm and justice), the authors lay out some ground rules for social media-happy surgeons, which, it should be noted, do not explicitly condemn the practice. The recommendations instead focus on ensuring that patients know how the images will be shared, have the right demand the images be taken down and adhere to standards of professionalism, in addition to advocating for trained videographers. They also emphasize the risks involved in plastic surgery, which often requires sedation and incisions. Though Salzhauer says his work has never resulted in a patient's death, the authors caution that antics in the operating room could distract from the procedure. The recommendations could in the future serve as the basis for new guidelines, though there are no plans for a vote on them at the moment. If so, all ASPS memberes — including Salzhauer — would be required to abide by them. It's not clear at the moment, however, if the organization will move to do so.

Salzhauer's social media presence isn't exactly unprecedented. Beginning with Extreme Makeover in 2002, a slew of reality shows have focused on plastic surgery, some of them capturing footage inside the operating theater. A few were disasters, like Fox's The Swan, others, like Dr. 90210, did quite well. Salzhauer himself could be getting in on the game. We Tv last year reportedly ordered six episodes of a reality show centered on his practice.

(Credit: therealdrmiami/Snapchat) The new guidelines seemed aimed at reining in, rather than quashing the practice. As Schierle notes, the practice has become more widespread recently, and is in danger of getting out of control. Many of the doctors broadcasting their scalpel skills on social media seem to be lured by the exposure (and attendant cash) that a well-curated Snapchat story can bring. A Racked feature from last year profiles several plastic surgeons who followed Dr. Miami's lead and began filming their own operations — with lucrative results. Schierle expressed his concern over the trend: "It's about notoriety," he says. "It's about showing the most outrageous content to attract more viewers and build your business." Salzhauer makes no excuses for fame-seeking, snapping selfies with DJ Khaled at the social media-focused Shorty Awards (he lost to Khaled) and posting plastic inspired parody videos of Old Spice ads (since taken down) and Justin Bieber songs. If the number of people routinely consenting to let him bare their procedures to the world is any indication, he'll keep right on doing it. [Update 10/5/17: The press release stating that the recommendations were up for a vote at the October ASPS meeting and could serve as the basis for new guidelines was inaccurate. The story has been updated accordingly.]