I have pointed before to dating research which shows a stronger race-bias from women than men, correcting for physical appearance. In other words, if a man found a woman attractive the extra bonus for being of the same race was relatively marginal compared to the inverse. Well, it seems that this strong element of race-consciousness in the fairer sex might manifest in an even more evolutionarily relevant context. Race Bias Tracks Conception Risk Across the Menstrual Cycle:

Although a considerable body of research explores alterations in women's mating-relevant preferences across the menstrual cycle, investigators have yet to examine the potential for the menstrual cycle to influence intergroup attitudes.We examined the effects of changes in conception risk across the menstrual cycle on intergroup bias and found that increased conception risk was positively associated with several measures of race bias. This association was particularly strong when perceived vulnerability to sexual coercion was high. Our findings highlight the potential for hypotheses informed by an evolutionary perspective to generate new knowledge about current social problems--an avenue that may lead to new predictions in the study of intergroup relations.

In the paper they're specifically looking at white women and their reactions to white vs. black men. Here's a figure which illustrates the dependence of race bias on menstrual cycle: 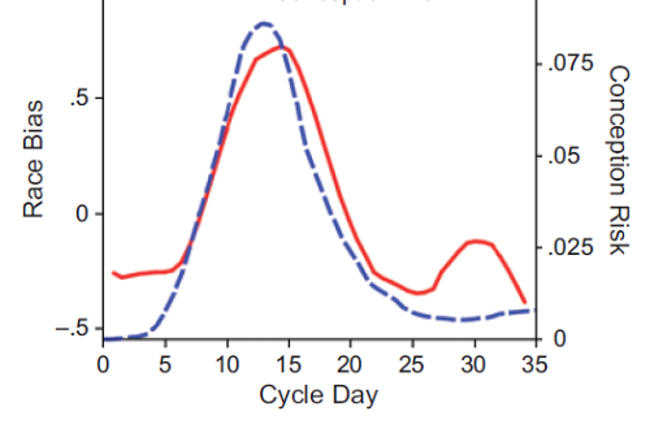 The authors aren't hypothesizing that there's a "race module" which emerged in the environment of evolutionary adaptiveness. Rather, they posit among ancient hunter-gatherers intergroup conflict led to a heightened awareness of the Other due to possible danger. And it isn't as if the necessity of this awareness disappeared with the rise of agriculture or even in modern societies. Humans seem to have a strong tendency toward "groupishness," and physical characteristics coded as race were a natural candidate for this sort of reasoning once intercontinental travel made it more common that different physical types would interact regularly (and groupishness is probably not bad by the way, it is one way around the coordination problem, and so may allow for social complexity). One can imagine for various reasons that women, especially fertile women, would be more fearfully aware of these intergroups dynamics when meeting at alien man than when a man meets an alien woman. We all know the stories about the traditions of kidnapping women in many societies to procure wives; Genghis Khan's mother was stolen by his father when she was a newlywed with another man. From a "rational" perspective men would have less to fear from alien women, and in fact perhaps they would see an "opportunity." Consider the Australian imam who labelled women subject to sex attacks by Lebanese gangs as "uncovered meat". Additionally, in pre-modern societies the systematic genocide of other peoples was often accompanied by an exception clause which allowed for the assimilation of fertile females by the conquerors as concubines. Here's a famous passage from the Bible:

31:15 And Moses said unto them, Have ye saved all the women alive? 31:16 Behold, these caused the children of Israel, through the counsel of Balaam, to commit trespass against the LORD in the matter of Peor, and there was a plague among the congregation of the LORD. 31:17 Now therefore kill every male among the little ones, and kill every woman that hath known man by lying with him. 31:18 But all the women children, that have not known a man by lying with him, keep alive for yourselves.