Do Gut Microbes Travel From Person to Person? 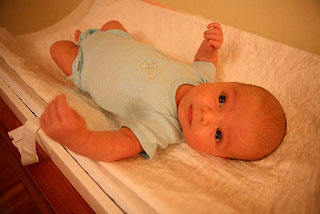 It's an exciting time for ecologists who study microbes. DNA sequencing has grown so cheap and fast that they can run around identifying bacteria living just about anywhere they can reach with a cotton swab. Turns out, bacteria are everywhere, even in the cleanest houses, and scientists are starting to wonder: do those bacteria in the home reflect the bacteria that live inside the inhabitants? And if so, can they travel from person to person? A small insight into this question came at one of the presentations at the International Human Microbiome Congress (covered by New Scientist in a short piece here

). James Scott, who studies molecular genetics at the University of Toronto, reported that the gut microbes of babies, as found in their poop, were also in the dust in the babies' homes. It's not clear whether this means that bacteria in the dust are colonizing the babies or vice versa---or both---but it's still something of a surprise. Gut microbes don't seem like the sort to thrive outside the body, as they tend to require an oxygen-free environment. But maybe the gut bacteria in the dust are in a dormant form, waiting to be absorbed into a new gut before flowering into life again. The corollary of this finding is that perhaps the other inhabitants of that home might pick up those microbes. Your gut microbiome

, thus, would be closer to your roommates' than to a stranger's, something that would be easy to test with modern sequencing techniques. There's also room to speculate that as we learn more about the microbiome's relationship to disease, the swapping of microbes within a household could reveal an infectious component to illnesses that we don't currently think of that way. It's just a speculation now, but an interesting one. A whole rash of projects like Scott's baby study, most yet unpublished, are starting to give scientists a sense of the interplay between our personal microbiomes and those of our homes. Many of these projects require the help of generous citizens like yourselves who submit samples from their homes for analysis, in fact: Here

to start with, if you're curious. Before you know it, you'll be swabbing everything in sight---just like the pros.