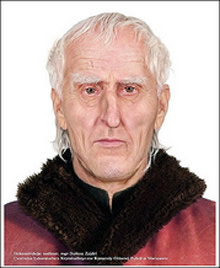 The remains of an elderly man found in a Polish cathedral in 2005 have now been confirmed to be that of Copernicus, the 16th century astronomer famous for displacing Earth from the center of the universe. A team of Polish researchers have matched DNA extracted from a tooth and a femur bone to that of a strand of hair found in one of Copernicus' old books. For all his revolutionary ideas, Copernicus was never particularly famous during his lifetime, at least not enough to have a marked grave. (He didn't publish his heliocentric treatise De revolutionibus until 1543, the year of his death, for fear of persecution.) Scientists knew he was one of the anonymous burials in a cathedral in Frombork, Poland, but they didn't know which one. So they used radar to scan all the bodies to find one about 60 to 70 years old, the astronomer's age when he died. The DNA evidence confirms that they got the right body. The scientists also sent the skull to a crime lab for some creepy digital facial reconstruction. The face that came back resembled portraits of Copernicus, complete with broken nose and a scar above the left eye—meaning he might have been popular with the ladies. Related Content: DISCOVER: Found: The Man Who Made Earth Move

HealthDoes Wearing Glasses Protect You From COVID-19?
Recommendations From Our Store