Long time readers know that I have a fixation on people not taking PCA too literally as something concrete. Tonight I finally merged the HGDP data set with some of the HapMap ones I've been playing with, and tacked my parents onto the sample. I took the ~50 HGDP populations, added the Tuscans, the two Kenyan groups, and the Gujaratis, and merged them. I thinned the marker set to 105,000 SNPs (I had to flip the HGDP strand too). Then I just let Eigensoft do its magic, and 2 hours on I produced my own plot. I'm still getting a hang of the labeling issues, but first let's look at what 23andMe produces (I'm green): 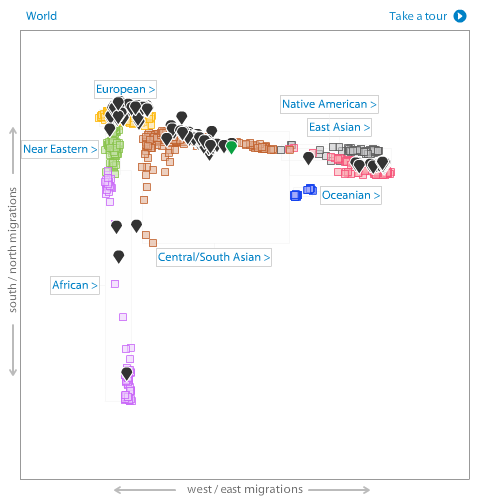 Now let's see what I outputted: 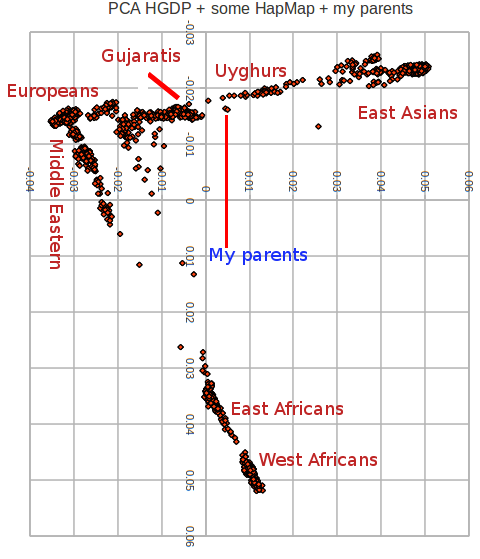 I suspect that the gap between my parents and the main South Asian cluster is just an artifact of the lack of South and East Indians in the sample. Additionally, things would look different if I removed the Africans, since the first principal component would be freed up. More on that later. All in all, still pretty awesome that circa 2011 this sort of thing is just an evening's concentration.